KANSAS CITY, Mo. — Why is it that more black men die by gun than any other gender or ethnicity?

We wanted to get to the heart of the matter within our community.

49 — That’s the number of people killed by violence in Kansas City, Missouri, so far this year. Of that number, the overwhelming majority of the victims are black males between the ages of 17 and 24. 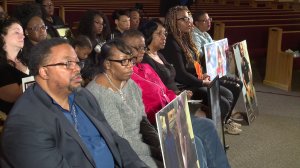 Local families who have lost sons shared heartbreaking stories with us. We talked about everything from teaching our kids the value of life to the need for more opportunities for our youth to coming together as a community to create change.

It all starts with a conversation.

Violent crime is a serious problem that’s affecting practically everyone in Kansas city in one way or another.

Ricks asked the mothers and community leaders that had gathered how many had ever feared their son or daughter wouldn’t come home one day.

Almost all of them raised their hand.

“A lot of crime is due to survival,” said panelist Wesley Hamilton with Disabled But Not Really.

He was shot and paralyzed at the age of 24.

“As a child, I watched my mom work multiple jobs, stressed out, but the only thing I wanted to do was help her out. As I’m trying to get jobs and it wasn’t paying well and it wasn’t doing things, then I focused on the streets because that’s what I felt could give us what we needed to survive.”

“When you look and you don’t see any opportunity and when there’s no opportunity, you have nothing to strive for,” said Rev. Rodney Williams, president of the Kansas City chapter of the NAACP. “I believe that gun violence is connected with poverty.”

“When I was shot and I was lying on the ground, I already knew I was dead,” Hamilton said. “It was just a reality for our community, so it wasn’t like a shocker. For African American males, especially young — we don’t see opportunity so well.”

“We have young men that have a mentality that says, ‘Better you than me,'” said Dr. Dred Scott, president and CEO of the Boys and Girls Clubs of Greater Kansas City. “It’s a dog eat dog kind of world, and we don’t value life the way that we should.”

Pam Dean knows that all too well.

“My son was gunned down — over an argument,” she said.

“Confrontation doesn’t have to result in death, and that’s what we have to get through to our youth,” said Trina Dodson with Healing Pathway KC.

“My son, Brandon Dean, he was actually murdered, one month and one day after his 21st birthday,” Dean said. “It just hurts me so bad.”

“One of the biggest issues that I’m finding is we’re too comfortable with it,” Hamilton said. “We’re told as kids in movies, music, that you’re not going to make it to 21. So when we hit 21, we celebrate it!”

“The only way that we solve this problem is that we acknowledge it from within the community, and we stand and come together with resources with ideas with programs that help us help the young people value life,” Scott said.

So what’s the solution?

“We have to look at policy and dig down into the policies that begin to create more disruption within our communities,” said Tracie McClendon-Cole, deputy director of the Kansas City Missouri Health Department. “If we don’t get actively involved with what is going on in our city government, our state government, our federal government in terms of the laws and the policies that are being enacted, we are never going to see the change that we seek to have in our community.”

“We need to address the mental health issues. We as black people, it’s a stigma for us. We don’t want to say, ‘Hey, I’m depressed.’ ‘Hey, I’m suffering from anxiety,'” Trina Dodson said. “Instead of going to get the proper help, instead of going to get the medication that we need, we self-medicate. And when we self-medicate, we make bad decisions.”

“We all need a checkup, so to speak,” said Damon Daniels, president of the AdHoc Group Against Crime, “to help people understand anger and how to express that anger and how to come to a place of expressing it to where it is healthy … that you’re not taking it out on anyone physically, emotionally and all the other ways that you can be violent toward someone.”

“Handcuffs and making arrests is not going to be the way to solve this problem,” KCPD Maj. Tye Grant said. “If we have to be involved, it’s already occurred.”

“We as a community cannot hold the police department accountable for all of our problems. We have to sit at the table and be able to agree that we are willing to fix it,” Dodson said.

“If we want to hold somebody accountable, then we have a little help doing it,” Grant said.

So where does it start?

“In the neighborhoods, in the schools,” Grant said.

“If we cannot take blame for our actions and the reason that our community is the way that it is, we will never grow. But if we can admit that we are part of the problem, we will grow,” Hamilton said.

“A part of that is on us as a community to help our young people understand and value life,” Scott said.

“There’s more to do,” Dodson said.

“But we still have hope,” McClendon-Cole said.

Ending violence is a complex issue, but we all need to come together to find solutions if we are going to see change.

Find more resources to help start the conversation in your neighborhood below.  Then watch the full conversation with our panelists in the video player below.

Editor’s note: FOX4 would like to say a special thank you to St. James United Methodist Church for letting us use their space to hold this town hall conversation.