PARKVILLE, Mo. — It was a somber occasion Tuesday night filled with tears and hugs among friends and family who are still in shock over a murder-suicide in Parkville. 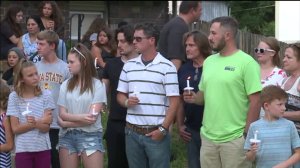 Friends, neighbors and family members gathered to honor the life of Maggie Girard. She was shot and killed Sunday night while at a family dinner with her ex-husband, Doug Pauling; his mother, Sharmalee Pauling; and Sharmalee’s husband, Carl Deruyscher.

Girard’s family has flown in from all over the U.S. and still cannot believe this tragedy.

“It is not easy. We are still trying to wrap our minds around it. It is nothing you could ever plan for or imagine,” said Shane Davidson, Girard’s cousin. “I think everything will start to settle in, and that is probably when the more difficult time and just trying to make sure we are strong for Maggie’s daughter, Bella.”

Bella is Girard and Pauling’s 14-year-old daughter who was at her grandmother’s house during the massacre. She told police that her dad tried to shoot her, too, but she got away.

Emily Smith said she met Girard when she hired her to clean her house. It was supposed to be a one-time thing.

“She turned out to be this amazing person in my life, and she ended up working for me for about 7 years,” Smith said.

Girard also worked for Debbie Eidsness, who was diagnosed with breast cancer in October. She said during one of her darkest times, Girard stuck by her side.

“I said, ‘Don’t come. My house is a mess,’ and she said OK.” Eidsness said of one particularly rough day. “I walked in the door from chemo, and my house was spotless, and she just left a note. She knew what I was going though. She would have done anything for me.”

Story after story about Girard’s kindness and selflessness was told at the vigil for a woman who always made everyone smile.

“When she talked, she was a comedian. Sometimes when she talked, it was very hard to follow her stories because she would have so many stories and get so excited you did not know what direction she was going,” Davidson said. “She was happy no matter what the situation.”

Family and friends set up a GoFundMe page for the 14-year-old survivor. Click or tap here to donate.

Editor's note: Some might find footage in the video above graphic. Viewer discretion is advised.

PLEASANT VALLEY, Mo. -- Surveillance video captured a Northland man striking his neighbor’s dog with a machete in his yard Saturday.

LAWRENCE, Kan. -- Student athletes moved a step closer to being able to benefit from their name image and likeness in Kansas with the approval of House Bill 2246 on Tuesday.

Similar measures have already passed in California and Florida, which will go into effect July 1. With every state bordering Kansas also considering it, athletic directors at both the University of Kansas and Kansas State University worry they could soon be at a competitive disadvantage in recruiting.

KANSAS CITY, Mo. -- An amendment to current Kansas City law would allow for stricter penalties for people who participate in illegal street racing and sideshows.

Mayor Quinton Lucas introduced an ordinance that would allow police to impound vehicles involved in sideshows.

‘Whatever it takes’: Family of Donnie Sanders has demands for prosecutor, KCPD after officer not charged

Some websites will hunt for COVID vaccine appointments for you, but is it reliable?

‘I’ve never seen anything like it’: Kansas City in middle of housing boom as homes sell fast

‘Whatever it takes’: Family of Donnie Sanders has demands for prosecutor, KCPD after officer not charged