KANSAS CITY, Mo. — Family and friends gathered Friday night at a Kansas City park to mourn the loss of a mother and child taken too soon.

Pink and white balloons soared above Hibbs Park, near 59th and Spruce, in honor of Sierra Robinson and her 2-year-old daughter, Noelani Robinson.

Police said Sierra was shot and killed in Milwaukee and Noelani’s body was later found on the side of a highway, three hours away, in Minnesota. 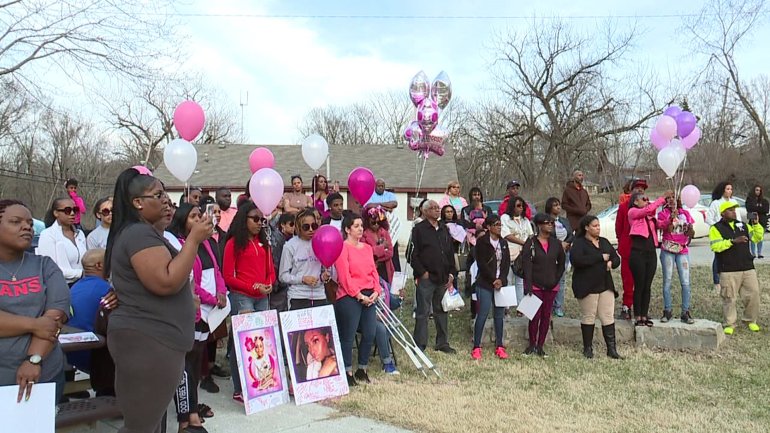 Sierra’s father, Hank Robinson, said he chose to have the prayer vigil at Precious Doe Memorial to raise awareness about child abuse. In 2001, that’s where the body of a 3-year-old girl was found decapitated.

“Sierra was my first born. Noelani was my only grandchild. Both had infectious personalities,” the KC dad said. “I really miss their smiles and presence.”

Sierra had wanted her daughter to know her father and took her to Milwaukee where Noelani stayed with the man for six weeks.

“I didn’t quite approve of him,” Robinson said.

According to court documents, Lipsey was with Higgins for several days before and after Sierra was shot and killed in Milwaukee on March 11.

Lipsey claims she flew to Minneapolis from Las Vegas on March 8, court records say. Higgins picked her up at the airport, then headed south to Austin, Minnesota.

The pair checked in to the Rodeway Inn & Suites, where Lipsey said she stayed all day Saturday while Higgins was away.

Lipsey said around 3 a.m. the next day, Higgins returned, and they left for Minneapolis, taking a bag of “trash” with them.

They eventually left the alleged “trash,” presumably the two-year-old’s body, on the side of a Minnesota road, court records say.

“It’s unfathomable to imagine that my granddaughter was frozen for several days,” Robinson said. “She was in a ditch on top of dirty snow.”

Lipsey said the two then went on to Milwaukee, Chicago and eventually Detroit, according to court records.

According to Robinson, police said his daughter and a friend went to meet Higgins at an apartment complex while he was in Milwaukee, thinking they were going to pick up Noelani and go back to Kansas City.

“She was there specifically to get her child,” he said.

But that never happened.

“Her and her friend started walking toward the building, and that’s when he started shooting and cut them down, shot them in the back,” Hank Robinson said.

He said Higgins allegedly shot Sierra three times, killing her. Her friend was shot twice, and she remains hospitalized in critical condition.

According to Lipsey’s timeline, the 2-year-old’s body was on the side of the road for five days before a passerby spotted it March 15.

Lipsey is now charged with harboring or aiding a felon. She’s since been freed on bond and has another court hearing April 1.

Higgins is being held in jail, charged with killing Sierra. He has not been charged in Noelani’s death.

The Kansas City mother and daughter will be laid to rest Saturday morning.