OAK GROVE, Mo. — A Platte City, Missouri woman killed in a horrific multi-vehicle crash on Interstate 70 near Oak Grove has been identified by her family.

Centerpoint Medical Center released a statement from the woman’s family on Saturday, identifying her as 74-year-old Linda Henderson. Linda’s husband, 75-year-old James Henderson was also injured in the incident and remains in critical condition.

“We are incredibly grateful for the enormous amount of love, support and prayers we have received from all over the country,” the family said in the statement released Saturday evening. “As we mourn the loss of such an amazing woman, we also know we have a long road ahead. With the great care he is receiving, the love and prayers of others, we have faith that he will have a strong recovery. We also ask for your understanding to respect our privacy as we deal with this event, and so we can stay focused on caring for and being here for our Father.”

The crash involving over 40 vehicles, according to the Sni Valley Fire District, was reported around 11:30 a.m. Friday, on westbound I-70 at mile marker 29, near Oak Grove. The crash closed the interstate for several hours as crews worked to clear the scene. Traffic was backed up for miles in eastern Jackson County. 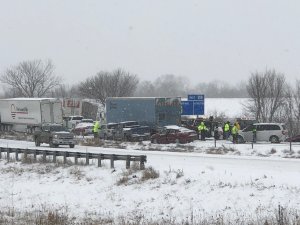 The wreck took place as snow began accumulating quickly across the metro with most areas seeing between 3’5″ inches of snow.

The Missouri State Highway Patrol said the driver of a semi lost control on the snow covered roadway and went off the side of the road, before coming to a rest partially blocking the highway. A vehicle driven by James Henderson with Linda Henderson as the passenger, struck the rear towed unit of the semi, according to the highway patrol. The driver of a third vehicle then struck the Henderson’s vehicle on the passenger side. A chain reaction then began with drivers of multiple other vehicles unable to slow down in time and crashing into each other.

Other injuries reported in the massive wreck were reported to be minor.

A fundraiser has been set up for the Henderson family HERE.

A fundraiser is set up for the Henderson family following yesterday's crash in Oak Grove that claimed Linda's life and left her husband, James, critically injured. My prayers are with this family, and all of those suffering from this loss. https://t.co/GkPDeApg5l @fox4kc

POLK COUNTY, Fla. — Seventeen people, most from across central Florida, have been charged in a six-day undercover investigation into child predators.

In Edgerton, incumbent Mayor Donald Roberts emerged as the front runner in the primary by securing 133 votes (roughly 67% of the total vote).

Arrowhead Events updated its existing health and safety protocols and announced the policy change Wednesday afternoon. All guests attending the concert are now required to wear a mask when entering or spending time inside enclosed public areas of the stadium, unless actively eating or drinking.