KANSAS CITY, Mo. — The family of an unsolved homicide victim is pleading Monday for witnesses to come forward and help police bring a killer to justice.

Detectives have had few leads in the death of Justin Powell.

The victim’s family admits that they did not approve of everything Powell did in his life, but they say that doesn’t justify his killing. 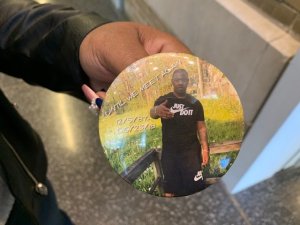 Detectives say someone shot and killed Powell in June 2018, near the intersection of Linwood Boulevard and Agnes Avenue.

Powell had been driving a Dodge Charger, and police found his body in the driveway of a vacant house in the middle of the block.

Witnesses have described seeing a dark colored car leaving the area, but that’s about the only lead detectives have had.

Powell’s sister says her brother had taken a shower at her home earlier that day, but she also says she didn’t know his friends, people she’s referred to as his family in the streets.

His sister says Justin Powell had spent some time behind bars, but was still loved by his family. He is survived by a 4-year-old son,1-year-old daughter and an adopted daughter.

Detectives say there are a lot of apartments in the crime scene area. Anyone with information should call the TIPS hotline. Up to a $10,000 reward is available for information that leads to an arrest.

Who killed Justin Powell? On June 23, 2018, officers in the area of 31st and Linwood heard shots fired and found 30-year-old Powell dead nearby. Today, his sister pleaded for help in finding his killer. Call 816-474-TIPS (8477) if you have info. $10,000 reward available pic.twitter.com/QnZeSydYd2

DURHAM, N.C. (WNCN) – Authorities say a 74-year-old woman died after she was struck by celebratory gunfire at a Fourth of July celebration Saturday night.

Officers responded to a reported gunshot incident around 11 p.m. Paulette Thorpe was transported to the hospital, where she died a short time later.

The shooting was reported just after 7 a.m. in the 11300 block of Spring Valley Road. The area is just west of Longview Lake and a couple of block north of Longview Road. FOX4's Kathy Quinn reports that seven shots were fired into the home.

‘God has another angel’: Broadway star Nick Cordero dies at 41 after COVID-19 battle