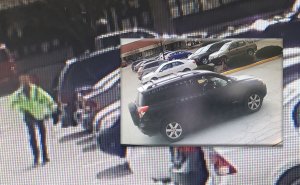 The first incident was reported at 2:09 p.m. at the Platte Valley Bank located off Barry Road. Officials said a suspect walked into the bank, showed a weapon and made a verbal demand for cash.

The suspect left the bank on foot, east bound, with an unknown amount of money. He is described as an older white male, wearing a black ski/stocking style cap with only one eye visible, blue jeans, black shoes and a yellow jacket with reflectors on chest and arms. He is said to stand around 5’6″ and weigh 160 pounds.

The suspect was believed to be driving a black Toyota RAV 4 with no front plate. (See the photos above)

No injuries were reported in this incident.

Another bank robbery was reported on the Kansas side at 2:25 p.m. at the Commerce Bank located off 47th and Johnson Drive in Roeland Park.

Officials said the suspect entered the bank, showed a weapon and shots were fired. The suspect made a verbal demand for money. They then left the bank with an unknown amount of cash to a vehicle being driven by a second another person. The vehicle is described as a dark 4-door compact sedan.

The suspect is described as a black male with a black jacket, black pants, and a black mask covering his face. He is reported to stand 6’1″ and stocky build. (See photos below)

No injuries were reported during this incident. 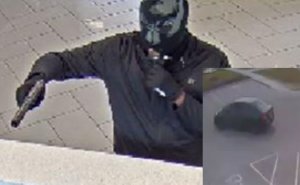 This is a developing story. FOX4 will continue to update as new information becomes available.