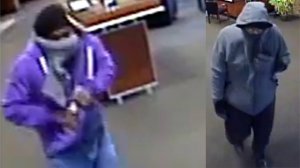 KANSAS CITY, Mo. — The FBI are attempting to locate two suspects after a bank robbery in North Kansas City Wednesday.

A weapon was not displayed during the robbery, according to the FBI.

The two suspects took an unknown amount of money. They left the bank on foot heading east on Armour Road.

On Thursday, the FBI also released photos of a vehicle they believe is associated with the robbery. See the photos below.

Anyone with information is encouraged to contact local law enforcement or the FBI Kansas City Office at 816-512-8200.

According to the KCK Police Department, officers were doing an area check in a public parking lot in the 600 block of South 71st Terrace aroud 7:40 a.m. when they discovered a stolen vehicle from Leavenworth sitting unoccupied.