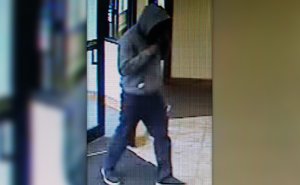 LEAVENWORTH, Kan. — The FBI is investigating an armed robbery at a bank in Leavenworth Wednesday.

Officials said around 2:15 p.m. the suspect entered the Citizens National Bank off the corner of 6th and Delaware and showed a handgun.

The suspect demanded money and left the bank on foot with an unknown amount of money.

The suspect is described as a black male in their late 30s with short hair and some facial hair. He was wearing a grey hooded sweatshirt and dark pants, according to the FBI. They also had their face covered with a dark mask.

No injuries were reported.