KANSAS CITY, Mo. -- A new company is transporting people into another world to offer a unique fright.

FlipSwitch VR in the Crossroads District uses virtual reality to immerse gamers in experiences such as Arizona Sunshine -- a pretend nuclear missile site that has been taken over by aggressive zombies.

When players move, so does the game -- and the zombies!

James Harbison and Alex Harbolt are gaming experts at FlitSwitch VR. Anyone age 10 and older can get in on the scary action.

"It just transports you to a completely different world," Harbison said. "If you go in and play our zombie game, you’re going to feel like you’re there in the zombie apocalypse instead of just being in a room." 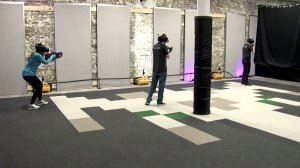 They said the virtual reality is so high tech, it's easy to forget the zombies aren't real.

"People love coming in and being scared, maybe more than a haunted house," Harbolt said. "In a haunted house, they can't touch you, and you can't really fight them off. These zombies -- they'll run at you. They'll kill you if you don't kill them."

Harbison and Harbolt said free-roam virtual reality has already gained popularity on the coasts. They’re hoping gamers and non-gamers come calling long after the Halloween season is back in its crypt.

Some of the FlipSwitch games might look violent for young players. The duo said there are also puzzle solving games and escape room tasks at FlipSwitch that aren't as terrifying.