KANSAS CITY, Mo. — Orange, red, yellow, green, and brown have taken over Kansas City as foliage reaches its peak. Missouri has a wide variety of trees, shrubs, and vines, making it ripe for a colorful and charming fall. The leaves change colors at different times in the season, so the fall effect can last for a few weeks. Sassafras, sumac, and Virginia creeper are some of the earliest to change color, beginning in mid-September. By late September, black gum, bittersweet, and dogwood catch up with fall.

Missouri’s peak for fall colors is usually around mid-October. This is when maples, ashes, oaks, and hickories change their colors. The progression of color change starts in Northern Missouri and moves southward down the state. Now would be a good time to do a road trip across the state. This way you can see a wide array of changes in the trees.

Some of the best places to visit for foliage vistas are: along rivers with forested bluffs, ridges with forested landscapes, drives down country roads, or float trips with forest canopies on a clear, blue-sky day.

Even treeless areas provide lovely views of fall. Prairies and roadsides provide a golden hue with shades of purple, olive, and auburn with autumn wildflowers and sometimes wild sunflowers, shrubs, and rustling grasses.

If you can’t make a road trip or go for a float trip, and you need to stay in town, you’ll find pretty trees in older neighborhoods, parks, college campuses, and cemeteries.

Cottonwoods along the Missouri River have just begun to turn yellow. Native prairie grasses, such as little bluestem and broomsedge are turning red, orange, and purple. The duration of fall leaf colors will depend on weather. With no high winds, heavy rain, or hard freezes predicted in the near future, the colorful cocktail will likely stick long enough for us to all enjoy. Perhaps up to Thanksgiving. 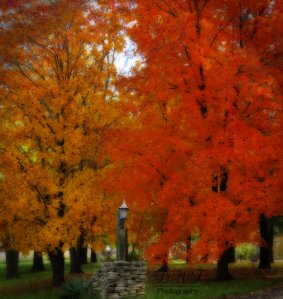 If you’re looking for some fall color hot spots for pictures or to inspire your creativity, here are some suggested sights.

Try Highways 45 and 224 along the Missouri River for a scenic drive. Throughout the city you’ll find trees popping with color. Driving between downtown and 75th Street on US 71 will provide amiable views.

If you live in the Northland, Searcy Creek Parkway off Northeast Parvin Road has some of the prettiest trees in the city. The walkway makes for great pictures and is close to Worlds of Fun.

In St. Joseph most of the oaks, sugar maples, and hickories have changed colors. The area has seen more frigid temperatures and harsh weather, so hopefully with some above-freezing nighttime temperatures and mostly sunny skies the leaves will shine more. This kind of weather should enhance the yellows, reds, and purples.

The loess hills along the Missouri River have, by far, the best color to be seen in our area. Good driving routes include US 59 starting northwest of Platte City, continuing northward through St. Joseph, then continuing along the river using Routes K and T to MO 111, US 59, and I-29 well into Iowa.

Science behind changes in leaf color

A green leaf is green because of the presence of chlorophyll, which is inside an organelle called a chloroplast. When chlorophyll is abundant, then green dominates the leaf’s pigments. Chlorophyll captures solar rays and uses the energy to manufacture food for the plant. This includes simple sugars which are produced from water and carbon dioxide. The sugars are the basis of the plant’s diet. This nourishment is the sole source of carbohydrates needed for the plant’s growth and development.

The chlorophylls are constantly being broken down for nourishment. During the growing season, the plant replenishes chlorophyll, so the supply remains high.

As daylight hours shorten and temperatures cool, the veins that carry fluids into and out of the leaf gradually close off. A layer of special cork cells forms at the base of each leaf. Then water and mineral intake diminishes. During this time, the chlorophyll supply decreases. When this all happens, the hidden pigments of color are revealed. The fall color pigments everyone loves are present in leaves throughout the year, but they get overwhelmed by chlorophyll’s role to nourish the plant and keep it green. Chlorophyll essentially oversaturates the greens masking the other color pigments. During winter, a tree’s roots, branches, stems, and trunk store the necessary tools to recycle and releaf the tree in spring.

Color changes in paintings over time

Van Gogh’s art has had a similar change with paint pigments. Parts of his “Flowers in a blue vase” painting mysteriously changed color over time. Scientists believe a chemical reaction with the paint and a protective varnish applied to the painting after the artist’s death in 1890 turned his bright yellow flowers an orange-gray color. Bright yellows in paintings were popular during Van Gogh’s lifetime, but painters struggled to find yellows that would last natural aging and lighting at galleries.

Van Gogh painted “Flowers in a blue vase” in 1887 in Paris. The Kröller-Müller Museum in the Netherlands acquired the painting in the early 20th century. Like most paintings at the time, Gogh’s artwork was covered with a protective varnish.

In 2009, a conservation treatment “revealed an unusual gray opaque crust on parts of the painting with cadmium yellow paint,” said paintings conservator at the museum Margje Leeuwestein.

Experts at the museum decided to investigate. They took two microscopic paint samples from “Flowers in a blue vase.” Researchers used powerful, microscopic, X-rays to distinguish the chemical composition of the paint and the varnish. They expected to find crystalline cadmium sulfate compounds from oxidation, but instead they found a lead-sulfate compound.

The researchers concluded that the negatively charged sulfate ions hooked up with lead ions from the varnish to form anglesite, an opaque lead-sulfate compound. The lead acted as a drying agent resulting in the changing of colors.

To keep Van Gogh’s painting from deteriorating further, experts suggested two methods. First, since the process starts with the photo-oxidation, it would help to put the artwork in lower light conditions. Second, a more “high-tech type of varnish” that is available in the present would also slow down the color changing process.

Places around the world with autumn

Trees shed their leaves in autumn partly because the maintenance to keep them would outweigh the benefits of photosynthesis during winter. The trees also shed leaves because of insects as predators, water loss, and damage from high winds or snowfall.

Some autumn coloration occurs wherever deciduous trees are found. The most brightly colored autumn foliage is found in the following regions of the world: southern mainland Canada, the United States; Scandinavia, Northern and Western Europe, north of the Alps, the Caucasus region near the Black Sea in Russia; Eastern Asia, including China, North Korea, South Korea, and Japan; South America in Argentina, Chile, and Brazil; and in New Zealand.

North America has more than 800 arbor species and about 70 oaks, compared to 51 arbor species and three oaks in Western Europe. Scientists have said the ice age impacted flora in different ways on the two continents providing for the different foliage textures.