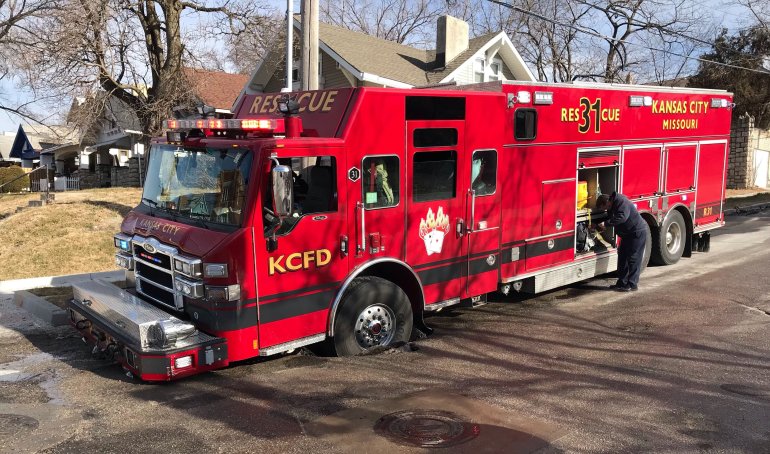 KANSAS CITY, Mo. — A sinkhole ensnared a Kansas City Fire Department rescue truck on its way back from a call today, resulting in a tow and a street shutdown.

Multiple trucks responded to a residential fire call at 11:15 a.m. on Jan. 7. Officials could not give details on the fire at the time, but they told FOX4 the truck was on its way back at the time the sinkhole opened up.

While waiting at a stoplight at 43rd Street, heading eastbound on Prospect, the front driver-side tire suddenly fell through the pavement. The truck could not drive out of the sinkhole and had to get towed out later.

Police reported the sinkhole to 311 at 12:40 pm this afternoon. KC Water responded to the scene to address a 6-inch sewage pipe that was under the cave-in and was damaged, Heather Frierson with KC Water told FOX4. She couldn’t say whether the pipe was damaged earlier and caused the cave-in or if the sinkhole was created by something else.

Crews closed the street down from Prospect to Montgall until 3 p.m., placing a metal plate over the hole, which is 5 feet in diameter and 3 feet deep.

Missouri teen who died of cancer not honored at graduation