OLATHE, Kan. — A former co-worker of Adam Purinton’s is speaking out about the man he knew, remembering him as a nice guy who always had a smile on his face.

Purinton is charged with killing 32-year-old Srinivas Kuchibhotla and injuring 32-year-old Alok Madasani and 24-year-old Ian Grillot during a shooting at Austin’s Bar and Grill in Olathe last week.

David Barger worked closely with Purinton when the 51-year-old accused murderer was in the IT department at Time Warner Cable. His former friend is now almost unrecognizable. 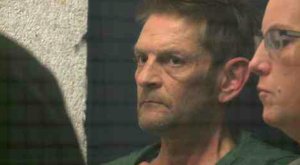 “You see this picture of Adam looking like pure evil with his hair messed up,” said Barger. “That’s our Adam? What happened to him?”

“He is only 51, and he looks older than I am and I am in my mid 60’s so something happened, I don’t know what it was, but something happened that caused him to deteriorate very, very quickly,” Barger continued.

Reports of alcoholism and Purinton’s downward spiral after his father’s death 18 months ago may have contributed to the tragedy on February 22, said Barger.

Purinton is accused of gunning down the three men, two of whom are from India. The notion that these shootings were the result of a racial attack is as foreign to Barger as the picture of his former friend plastered on television and the internet.

“I never heard him say one thing that would even remotely have any kind of hate in his life at all,” Barger said. “You can only conjecture that something was said and surely he didn’t have this planned, surely it was a snap decision, and he just broke, I don’t know, I wasn’t there.”

Dinesh Kansal is an Indian living in Olathe and attended Purinton’s first appearance Monday. He says this tragedy has rocked the community, but does not change his opinion of the people or city he loves.

“I am an Indian and I have never found and discrimination or an kind of threat by anybody,” said Kansal. “We moved here about 15 months ago from Virginia and people sending us emails all over the world saying what kind of place have you moved to? So I wanted to see what kind of person who would do something as heinous as this.”

Purinton was wearing a suicide prevention suit during his first appearance. He waived reading of the charges against him and asked for a public defender. Purinton is being held on a $2 million bond and will be back in court March 9 at 11 a.m.