TOPEKA, Kan. — The Kansas Division of Children and Families released over 2,000 documents in its file on Adrian Jones and his family Tuesday. This, after Missouri released almost 500 pages of paperwork on the Jones family when they lived in that state.

The information can be confusing for the average person, but Dianne Keech worked at Kansas DCF as a director from 2013-2015, and she explained what lies within.

“I know for sure in Missouri they did (fail Adrian). I have not reviewed the records in Kansas yet,” said Keech on Tuesday, just hours after Kansas released its file.

“I expect to find in here serious omissions of judgment.”

Keech said the problems with protecting children is similar on both sides of the state line. It boils down to how the agencies separate risk from safety.

“You say, ‘yeah, they are at risk but they are safe?’ It’s almost like you are saying a child is at risk sitting in the middle of the street but until a car hits him, he is safe?”

Documents show DCF workers deemed Adrian safe but at very high risk for abuse and neglect. From the very first visit to the Jones’ house, Keech says the system failed the little boy.

Over time, Adrian told workers about the abuse, being kicked and punched, tied up and locked in his room but no one listened to the child. All of this while living with parents who had a history of drug abuse and domestic violence.

It’s difficult to get a complete picture of what really happened in the Adrian Jones abuse investigations because much of the information has been redacted by DCF.

“He fell through the cracks because they did not use risks to determine his safety, they believed parents instead of the child,” said Keech.

“They did not gather all of the pertinent information, they did not have appropriate follow up and they did not hold those parents accountable. It’s as simple as that.”

Keech says the agency that is supposed to protect children, protects itself first, especially when it comes to child death cases.

“We are told not to document anything in emails regarding what we may not have done correctly,” said Keech. “I was told by an administrator, one of the reasons we don’t document that is because when we get sued, all of that information is discoverable and we don’t want to help the attorney’s sue DCF. I was told by an attorney that we would not be documenting anything in an email, and that if we were to have conversations about a child’s death, that conversation was to be on the phone or if we had a meeting, we were to take handwritten notes and afterward we were to shred those notes.”

Keech says even though Adrian Jones was abused to death by his parents, the child’s death will not be reported to the National Child Abuse and Neglect System. If there is not an open case at the time of death, DCF is not required to report child deaths in which the agency had a history.

“So they are absolutely protecting themselves. They absolutely do not want any accountability and they don’t want anybody to take a look and peer on the inside of what’s going on,” said Keech. “It is time for communities to hold child welfare accountable in both states.” 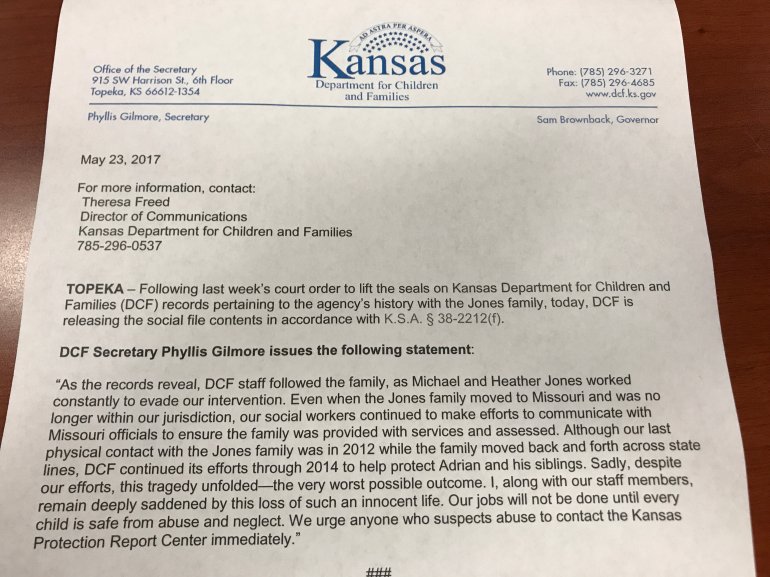 KANSAS CITY, Mo. -- A Kansas City, Missouri, teen was scammed when she bought a car off Facebook Marketplace.

When FOX4 heard about her story, we jumped into action and got Cars 4 Heroes involved. Now she's headed to college in her own car.

Police said Jay’Viea Hurt was last seen in the area of 63rd Street and College Avenue around 4 p.m.

As entertainment events return to Kansas City metro, so do mask orders

73.9% of Missouri seniors have been vaccinated

McCormick recalls some seasonings due to salmonella concern