Skip to content
Watch Now
Watch Now
FOX4 News at 10
This is an archived article and the information in the article may be outdated. Please look at the time stamp on the story to see when it was last updated.

KANSAS CITY, Mo. — There’s a new idea for one of the metro’s old buildings.

The former home of the Kansas City Star will soon become a downtown entertainment destination known as Star Bar + Rec, featuring outdoor sand volleyball courts in the heart of downtown.

The trash bags and dust bunnies found in the building’s parking lot and century-old building won`t be there for long. Organizers said Star Bar And Rec is expected to open close to this year’s end.

The building at 17th and McGee will be transformed into an indoor/outdoor entertainment center and office complex. 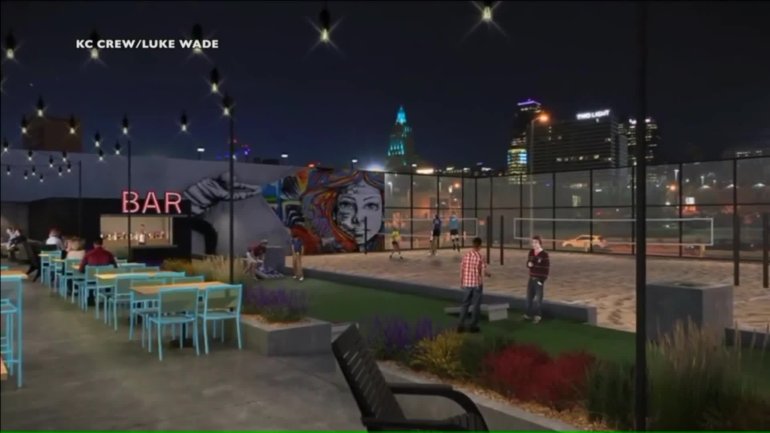 Luke Wade, one of KC Crew`s founders, leads a nonprofit that organizes adult athletic and rec leagues in the metro. He said his group will be instrumental in providing programming at the forthcoming fun center.

The building itself is getting a major facelift. On Wednesday afternoon, a crew of workers toiled away with machines that stirred up the dust amid a hissing noise.

Wade said Star Bar + Rec will also be home to a bar, office space and an indoor fun center with games. KC Crew is circulating a viral video that shows Wade giving a virtual tour of the building. The video clip also shows artists’ renderings of what the future may hold.

“Gone are the days when I’m just sitting at a bar staring at the wall. People want things to do, and that’s what we’re trying to do. KC Crew loves keeping keeping people active in the community, and we’re basically helping to build that space for that entire idea,” Wade said.

Wade points to that section of downtown Kansas City as a center of residential and commercial growth. He pointed to a bevy of new businesses and homes that have popped up here, furthering the trend of the next generation moving downtown.

The Kansas City Star kept offices in that building until last May when it consolidated in its printing press complex near the downtown loop. The newspaper had ownership of that location for more than a century.

WASHINGTON – President Trump said Friday that he plans on signing an executive order on immigration that will provide a "road to citizenship" for recipients of Deferred Action for Childhood Arrivals (DACA) program.

Trump told Telemundo's José Díaz-Balart that he would be signing a "big immigration bill" that would involve the so-called Dreamers, immigrants brought to the United States when they were children.

KANSAS CITY, Kan. -- The grandmother of a missing KCK girl whose disappearance triggered a statewide AMBER Alert was devastated by news police had found the body of 3-year-old Olivia Jansen. But she was also angry. Vickey Saindon wishes more could have been done to make sure the little girl was OK. She said she hadn’t been able to see Olivia in months and had called authorities to try make…

SHAWNEE, Kan. -- Police had to remove a youth baseball coach from the 3&2 West Complex in Shawnee after he was informed that his team was no longer eligible to compete due to a state- mandated COVID-19 quarantine for people traveling from Alabama.

The 3&2 West Complex is one of the sites hosting the Under Armour Championship Series this weekend.

Kansas sees 240,000 mail-in ballot requests, more than ever before

Joe’s Forecast: Watching for storms to start the weekend