He plans to make implicit bias training mandatory for everyone in his department, rename the Conviction Integrity Unit as the Community Integrity Unit and is asking for funding to hire three more investigators for his office, to look into claims of police abuse from the public.

A former assistant district attorney who worked under Dupree believes some of what he said Wednesday is a different approach than when she worked there.

While working at the Wyandotte County District Attorney’s Office, Danielle Sediqzad was banned by a non-disclosure agreement from talking about anything that happened in the office.

No longer working there, Sediqzad shared what she calls hypocritical statements Dupree made.

“I just had to keep going back and re-listening to certain things that he was saying because they were in such contradiction to the things that he has done,” Sediqzad said Thursday.

Sediqzad was an assistant district attorney in the Wyandotte County DA’s office from 2016-2017. She said she was taken back by this statement Dupree made during a news conference Wednesday:

“Here and our county, police were telling other police not to cooperate with the district attorney or its investigation, or he may be coming after you,” Dupree said. “This is what was put out there. I could not believe what I was reading as I thought we were all on the same side of justice.”

“It was a true moment of, ‘Did I just hear that?'” Sediqzad said. “And I don’t know if that’s true or not, but I do know that he asked me, as a prosecutor, not to cooperate in a local police investigation.”

Sediqzad said, in 2017, during a high-profile case update in Dupree’s office, he instructed Sediqzad and her co-council not to cooperate with police.

So upset at what she calls an inappropriate order, Sediqzad sent herself an email documenting the comment.

In that email dated September 6, 2017, Sediqzad wrote, “Mark indicated that there will be an Internal Affairs investigation and that, ‘You don’t have anything to say — let them investigate their own people.'” 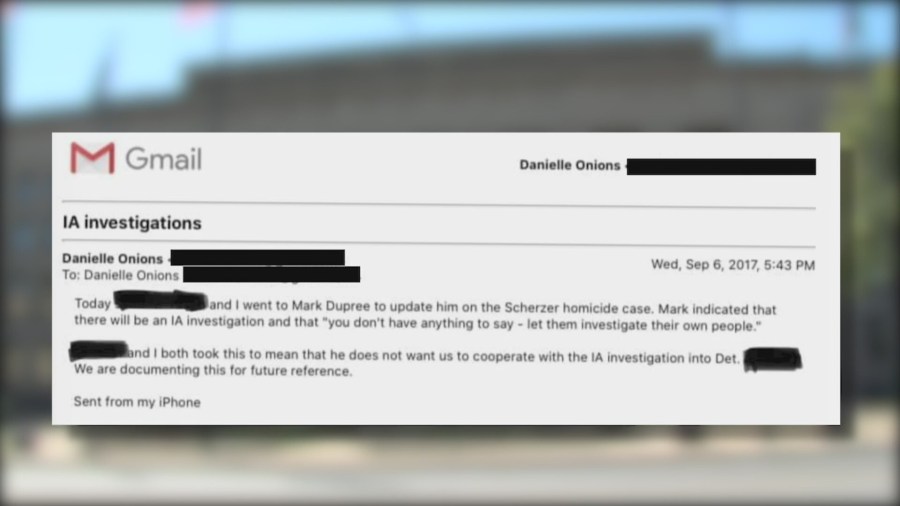 Sediqzad told FOX4 she would have disobeyed Dupree’s order and cooperated with police but nothing ever came of that investigation.

She also pointed out another comment from Dupree’s news conference — a premise she agrees with.

“It is no longer acceptable to simply say to the public you are pursuing justice,” Dupree said Wednesday. “We as law enforcement must be seen pursuing it.”

“I think that if we want to change and real change, we should know which politicians are talking in the talk and which are actually doing the work and walking the walk,” Sediqzad said.

“And so, I just feel like if Mark is going to lob accusations at certain agencies, then he also needs to answer for what he has asked his workers to do.”

Sediqzad resigned from the DA’s office and is now working as an assistant district attorney in another county.

FOX4 requested an interview with Dupree and in reply, he sent the following statement:

“The former employee who is either mistaken or being deliberately misleading for political purposes, was involved in more than one criminal case where an IA investigation was ongoing and she was aware then as all of my ADA’s are; that the present process for investigating law enforcement conduct is with the agency they are employed by. This is exactly the process I am trying to change.”

ROSWELL, N.M. – With virtual learning the only option in southeast New Mexico counties, a photo of a fourth-grade student going to great lengths to learn is getting a lot of attention on social media.

"I don't got [sic] internet and I'm protesting to go back to school," fourth-grader Jonathan Endecott told KRQE.

INDEPENDENCE, Mo. -- Deadlines to request a mail-in ballot or have an absentee ballot mailed to you have passed in Missouri. So what do you if you're immunocompromised or, worse yet, test positive for COVID-19 between now and the election?

Jackson County just resolved that problem Thursday and will host special voting hours for COVID-19 patients and others who have to quarantine because of possible exposure to the virus at election headquarters beginning Saturday.

KANSAS CITY, Kan. -- In a normal year, Ron Holm starts to put in long hours in the days leading up to Thanksgiving.

But this year, for the first time, his company, Lights of Christmas, is getting inundated with calls well before Halloween even rolls around.

Asteroid samples escaping from jammed NASA spacecraft: ‘Time is of the essence’

PHOTOS: Get an inside look at the metro’s newest coworking facility, Spark Kansas City

Navy: ‘Aircrew did not survive’ crash in Alabama neighborhood

Asteroid samples escaping from jammed NASA spacecraft: ‘Time is of the essence’