McGonigle comes to FOX 4 from KSDK-TV, the NBC affiliate in St. Louis, Missouri, where he was morning anchor for the last six years. He holds a bachelor’s degree in communications from Saint Louis University, and a master’s degree in mass communications, with an emphasis in broadcasting, from Emerson College in Boston. 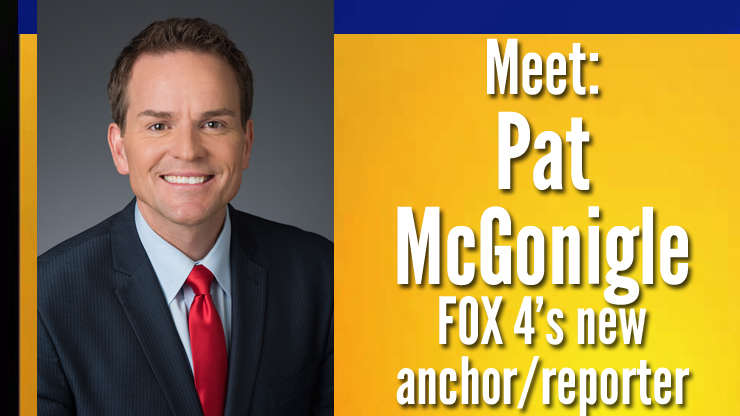 “Pat is a perfect addition to our FOX 4 family. We believe that his personality and experience are an extremely good fit and are pleased to find someone with strong Midwestern roots. We are looking forward to Pat’s involvement on-air and within the Kansas City community,” said FOX 4 Vice President and General Manager Tracy Brogden Miller.

Prior to his time in St. Louis, Pat was an anchor/reporter in Rochester, New York; Grand Rapids, Michigan; Omaha, Nebraska; Portland and Bangor, Maine.  McGonigle will join Loren Halifax on the FOX 4 News at 10 starting July 17, 2017.

Look for more on Pat McGonigle on the FOX 4 Facebook page, as we introduce him to the city, and visa versa!

In 1949, WDAF-TV became the first television station to broadcast in Kansas City.  With more than 59 hours of news programming every week, FOX 4 is continuing 68 years of excellence and service to the Kansas City Community. WDAF-TV FOX 4 is owned by Tribune. Tribune Media Company (NYSE: TRCO) is home to a diverse portfolio of television and digital properties driven by quality news, entertainment and sports programming. Tribune Media is comprised of Tribune Broadcasting’s 42 owned or operated local television stations reaching more than 50 million households, national entertainment network WGN America, whose reach is approximately 80 million households, Tribune Studios, and a variety of digital applications and websites commanding 60 million monthly unique visitors online, including ScreenerTV.com and Covers.com.  Tribune Media also includes Chicago’s WGN-AM and the national multicast networks Antenna TV and THIS TV. Additionally, the Company owns and manages a significant number of real estate properties across the U.S. and holds other strategic investments in media. For more information please visit www.tribunemedia.com.

TAMPA, Fla. -- Deputies arrested a Florida woman accused of a fraudulent return scheme involving dozens of Amazon accounts and thousands of returned items, according to the Hillsborough County Sheriff's Office.

From March 2015 until August 2020, investigators said Hoai Tibma, 32, operated a scheme in which she reused prepaid shipping labels generated for canceled orders, and then applied them on other returns.

KANSAS CITY, Kan. -- The suspect believed to be involved in a kidnapping in Kansas City, Kansas Sunday morning has been apprehended, according to police.

WASHINGTON, D.C. -- President Donald Trump told reporters Tuesday that a coronavirus relief package expected to include another round of direct payments to Americans won't happen until after Election Day.

Even with the delay, Trump seemed confident a deal could be reached after November 3.