The suspect is being held in the Henry County Jail on two million dollars bond. He was arrested early Thursday morning in Clinton, Mo., after he reportedly went into an Applebee’s restaurant there and allegedly confided to the bartender that he had been involved in a shooting.

Police say Adam Purinton shot the three men in the picture above, then fled Austins, as the victims were taken to a hospital. They also say that the shooting suspect left the bar after an argument and then returned with a gun.

Srinivas Kuchibhotla died from the gunshot wound inflicted on him. Kuchibhotla’s friend and Garmin colleague, Alok Madasani, 32, was also shot. He and the third victim, Ian Grillot, are listed in stable condition at the hospital.

“It’s just unbelievable to see something like that happen here. I heard it started off with an argument, then after the argument the dude left, came back and then brought his gun,” Darius Thomas said.

Friends of Srinivas Kuchibhotla started a GoFundMe account, explaining ‘an intoxicated man hurling racial slurs opened fire inside a packed Kansas bar killing our dearest friend…’ Friends say Kuchibhotla is married and ‘the kindest person you would ever meet.’ They hope to collect enough money to be able to return his remains to India ‘so his parents can say goodbye to their beloved son.’

Kuchibhotla’s friend and Garmin colleague, Alok Madasani, 32, was also shot and remains in the hospital, along with the third victim, Ian Grillot, 24.

Madasani received his masters degree from University of Missouri-Kansas City. He lives in Overland Park.

“They were confronted with racist, bigoted remarks and ultimately shot as part of what appears to have been a vicious hate crime,” the account set up for Madasani says.

Witnesses and members of Grillot’s family say he was trying to intervene on behalf of the victims when he was also shot.

“Ian (Grillot) found himself in the wrong place trying to be a helping hand,” his sisters posted on the GoFundMe page.

FOX 4 is committed to thorough coverage of this story, which is being reported nationwide. Put the FOX 4 app on your phone and follow our Facebook page for continuing coverage and developments. The Olathe Police Department will hold a news conference at 4 p.m. about the homicide investigation. The Johnson County District Attorney’s Office and FBI will also be there. Turn on FOX 4 at 4 p.m. for coverage. If you’re not near a television, we’ll have it on our livestream and Facebook page. 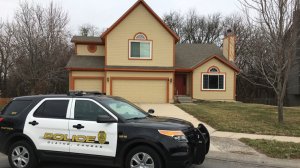 Police in Olathe waited Thursday for hours outside the suspect’s home on West 155th Terrace, between Mur-Len and Ridgeview Roads, guarding it until a judge would issue a search warrant to go into the house and collect evidence.

“He served in the Navy. I really don’t see him a lot. I’m not that close to him, just know him as a neighbor and he seemed nice. He’s lived here for a long time. It’s shocking to hear about what he’s accused of, ” says the suspect’s neighbor, Richard Morris.

KANSAS CITY, Mo. -- The time has come for Kansas City to show the international governing body of soccer why the 2026 World Cup should be hosted right here.

The FIFA World Cup selection committee is starting their second leg of city tours that include 17 cities in the United States vying for 11 spots.