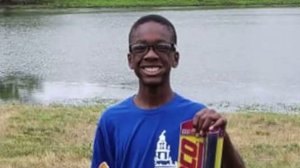 Jayion was a regular at the East Lawrence Recreation Center, part of the "Called To Greatness" ministry, which helps kids develop into leaders.

During the ministry's 3-on-3 Basketball Experience, participants took a moment to pay tribute to Jayion.

He was their teammate and friend, and many say they will miss the energy that he brought to nearly everything he did.

"In the game of basketball you like to shoot right?" said Jesse Brinson, outreach and development coordinator for Called To Greatness. "But you can’t spell jumper without the J-on. You think about Jayion’s name, the J on the jumper. And he loved it. You would see his smile just grow bigger than his face."

Jayion was with his family Thursday at Outlet Park when the boy disappeared after going into the Clinton Lake spillway to cool off on an extremely hot day.

The family didn't know the U.S. Army Corps of Engineers had opened the spillway, releasing a fast moving, rapidly rising stream of water.

Brinson says he was getting ready to coach Jayion in football this fall. Instead, he will remember how much value Jayion brought to others in the short time he was with us.