Garden City Mayor Daniel Cantrell has recently been in the news after laying off the city’s entire police department. Now, what many are calling a racist post has put him back in the headlines. 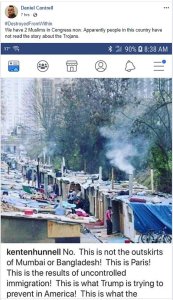 Beginning with #DestroyedFromWithin, the Facebook post reads, “We have two Muslims in congress now. Apparently, people in this country have not read the story about the Trojans.”

It references a story from Greek mythology where the Greek army staged a sneak attack on the city of Troy by hiding in a Trojan horse.

Residents of Garden City and members of the Islamic community are taken back by what they are calling a discriminatory and racist post.

“It offended me as much as this guy is offending me right now and he should be offending a Christian sitting next to me, because it is just an offensive statement,” Arif Ahmad, a Muslim and member of the Islamic Center of Johnson County said.

“If we start taking notice of these few and far between people, we would probably not get a good night sleep, ever,” Ahmad said.

Ahmad believes public officials should be held accountable for what they say.

FOX4 made several attempts to talk to Cantrell at his Iron Works business, on the phone and at City Hall. He was nowhere to be found. 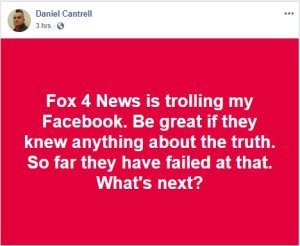 After we visited City Hall, the offensive Facebook post was deleted and replaced with this, “Fox 4 News is trolling my Facebook. Be great if they knew anything about the truth. So far, they have failed at that. What`s next?'

In that post Cantrell said he deleted it because he "didn't want them (FOX4) harassing anybody else that had chimed in on my post that happens to believe the same thing I do."

Garden City resident Shawn Manning agrees. "It will make me look at the ballot next time and contemplate whether or not that person is the right person for this position."

FOX4 has extended an open invitation to Mayor Cantrell to interview about the post and explain his side of the story.

The pandemic, along with trade disputes, have made America's relationship with communist China less cooperative in the last year. That's why the Sister City Association believes it's important for all peoples to work together to defeat the virus.

OVERLAND PARK, Kan. -- Overland Park police are searching for two people they'd like to talk to in connection to a deadly hit-and-run crash last month.

CLEVELAND — President Donald Trump billed his trip to Ohio Thursday as a chance to promote economic recovery, but he quickly pivoted to a deeply personal attack on Joe Biden, even questioning without foundation the former vice president's faith in God.

Even for a president known for his blunt criticism, Trump's remarks stood out and they signaled how contentious the campaign may get over the coming months.

US State Department lifts global ‘Do Not Travel’ advisory

Remains found are those of Missouri woman missing 10 years

Lack of study and oversight raises concerns about tear gas

US State Department lifts global ‘Do Not Travel’ advisory