GLADSTONE, Mo. — A man in his 30s is dead, and Gladstone police are still looking for the driver who hit and killed him in the parking lot of a thrift store Tuesday night.

Police are looking for a white, older-model pickup truck in connection with the incident that killed 36-year-old James E. Pettijohn.

Don Henson and his friends were standing in the front yard Monday night when they heard the boom..

“We heard a truck peeling out in the street and then we heard a big crash,” Don Henson said.

The incident also left a woman Pettijohn was with badly hurt.

“The truck was peeling out turning the corner on North Oak Trafficway, heading south,” Henson said.

Henson said he was in a bad car crash last year and strangers rubbed his back and calmed his nerves as paramedics arrived. So when he saw a man lying there nearly lifeless, he had to help.

“I just wanted to be there for him.  So I was holding onto his head and he had his eyes opened. He didn’t say anything and after about five minutes he made a couple faces and his arms stopped moving and he passed,” Henson said.

“I don’t know what would make somebody so mad to kill somebody,” Henson said. “Because if you’re peeling out in the street and driving a car across the parking lot, you’re aiming at somebody, you’re not just wanting to scare them.”

Nearby security cameras captured the image below of the truck police are trying to find. 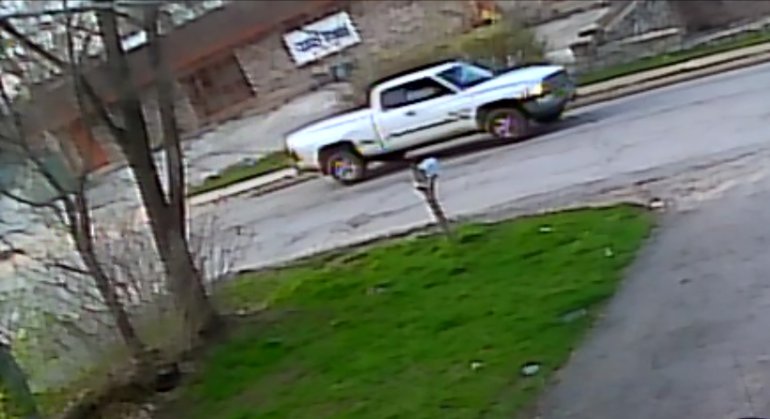