LAWRENCE, Kan. — Thursday marks one year since a devastating EF-4 tornado leveled dozens of homes in Leavenworth and Douglas counties, causing millions of dollars in damage.

Remarkably there were only six, mostly minor, injuries from that tornado. The majority of people were hurt by a smaller separate tornado that rolled a pair of storm chasing vans.

Those 12 people that were hurt, some of them seriously, signed up to take part in a storm chasing tour, something that’s becoming increasingly popular.

FOX4 tried several times to contact the tour operator by phone, text and email with questions about what they were seeing at the time of some major decisions leading right up until impact. They have not responded to our questions about how they ended up directly in that storm’s path.

Going back to at least the release of the movie Twister, many Americans have been captivated by tornadoes.

“It’s always been a lifelong passion of mine. Tornadoes have always fascinated me,” Skip Talbot said.

Talbot has chased tornadoes since 2003 but has always been haunted by one chase.

“Holy cow, is it going to hit El Reno? That’s a big tornado!” he can be heard exclaiming on video he recorded during the 2013 El Reno, Oklahoma, tornado.

He survived that storm, but four fellow chasers didn’t.

Since then Talbot’s been active in discussion groups, researching not only storms and how they develop, but also the actions of storm chasers.

He’s studied the EF-2 tornado that formed in Douglas County on May 28, 2019 extensively.

The man leading the storm chasing tour — who’s in the Guinness Book of World Records for witnessing the most tornadoes at more than 750 — can be heard on video from that tornado exclaiming, “Debris falling from the sky, debris falling, tornado right here, you’re in a tornado!”

“We heard that some of the most experienced storm chasers out there had been impacted by a tornado. We wanted to figure out why and what went wrong,” Talbot said.

Each of the vans were sent tumbling as they were rocked by a tornado with wind speeds estimated at 115 mph. Lieberman was recording at the moment of impact.

“Immediately it just flipped us, and we just bounced and rolled and banged like metal crashing for what seemed like forever,” he said.

“All the windows in the van I could see were shattered. People were thrown around, the airbags were deployed,” Kaufman said.

Twelve of the 18 people on board the two vans were treated on scene for injuries or taken by ambulance to the hospital. Kaufman’s injuries were the most serious — he suffered a broken neck.

“I was told the break was unstable, and they were going to rush me to University of Kansas Health System so I could have surgery on my neck,” Kaufman said.

After the incident, remaining tour guests said they were told by the tour operator they were hit by a surprise satellite tornado. Silver Lining Tours posted the following on its Facebook page: 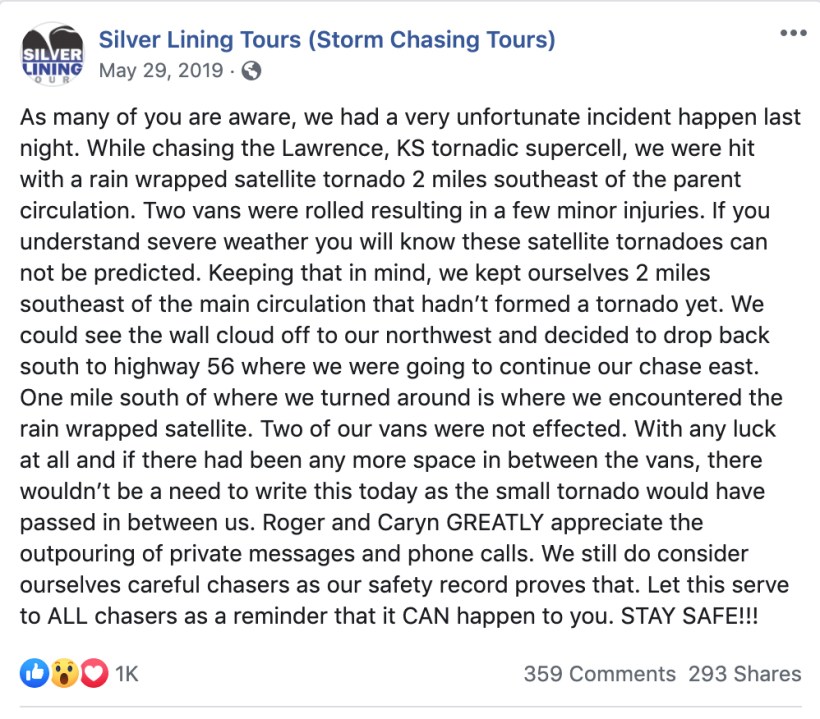 The National Weather Service has since determined, before it merged with the tornado that would later hit Linwood, Kansas, a separate tornado was on the ground for several miles.

“This was a high precipitation super cell storm, and what I learned after our trip is that local TV stations in Kansas City had been warning for about half an hour that we got hit that this was an extremely dangerous storm,” Lieberman said.

“We can very easily see a couplet now on a radar, so it’s very likely that we have a tornado right now rain-wrapped,”FOX4 meteorologist Karli Ritter warned viewers as the initial tornado warnings developed. They would later turn into a tornado emergency as the system recycled, the tornadoes merged and strengthened.

Talbot said rain-wrapped tornadoes are some of the most dangerous to chasers.

“On a high precipitation super cell, that tornado is almost invisible, and most of the time it is just so buried in rain that you can’t see it all,” the veteran chaser said.

“I have questions and concerns about what we were doing there given all the warnings that there were. Why did we turn north and drive 3 miles into the core of this high precipitation storm?” Lieberman said.

Again, Silver Lining Tours didn’t respond to our questions. Nor have they answered Skip Talbot as he tries to learn what happened so he can help other chasers learn from the incident.

Talbot said he’s not sure if the tour was caught between a developing tornado and the first one when the leader decided to turn back around and head south, whether the storm structure was misidentified, or if the chasers were trying to get a view of the tornado from a common area in storms to the northeast called the inflow notch.

But he said that maneuver has left other chasers in a bad spot if they don’t have available escape routes.

“They are basically racing a freight train across its tracks, and they aren’t making that race. We’ve seen this problem over and over again, and it’s getting chasers hurt and killed,” Talbot said.

Remaining guests who were part of the tour never chased again after that incident three days into the weeklong, $2,500 tour.

Lieberman said he wasn’t offered any refund, but Kaufman got a refund for the nights he didn’t spend in a hotel because he was in the hospital.

Kaufman has since recovered for the most part. He said the tour never reached out while he was in the hospital or since then to see how he was doing.

He still sees the benefit of giving people a peak at nature’s fury, but has no plans to chase again. He hopes people who sign liability waivers like he did before his 50th birthday trip of a lifetime understand just what risks they’re acknowledging.

“Realize no matter how safe of a record these individuals may have, there’s always the possibility something may go wrong,” Kaufman warned.

“That’s really what you need to keep in mind that there’s no regulation, there’s no oversight or licensing at all,” Talbot said. “So if something feels wrong or doesn’t seem right, the clients truly need to speak up because you are putting your lives in these people’s hands.”

Silver Lining Tours posted after the incident they would stay at least 7-10 miles away from high precipitation super cells from now on.

GARDNER, Kan. -- One person died and three others were injured in a four car crash near Gardner Monday morning.

The Johnson County Sheriff's Office said the crash happened around 8:30 a.m. at 175th and Four Corners Road, west of the city limits.

INDEPENDENCE, Mo. -- An Oak Grove teenager is asking for the community's help in identifying the driver who hit his car and didn't stop.

Madison said his 2004 Pontiac Grand Am was his lifeline. Now, it's totaled.

Every day the car took the 19-year-old from home to home while he delivered meals for Door Dash. Now, he's without his car and a job because he said someone hit his car near 23rd Street and Glenwood Avenue in Independence.

OVERLAND PARK, Kan. -- A cheer gym owner in the metro is rejoicing after a stolen equipment trailer worth $15,000 was recovered.

Johanna Lucas credited FOX4 and a Facebook group in part for the recovery.