HARRISONVILLE, Mo. -- One high school in the metro witnessed an eye-opening experience on Friday. Students surprised a beloved teacher with a sweet surprise, one that allows him to exist in living color.

All his life, Harrisonville High School science teacher John Magoffin says he could only see drab colors. He's colorblind. His fellow teachers and students called a special assembly, presenting him with a life-changing gift. A special pair of glasses that allow him to see colors.

Magoffin has been a teacher at HHS for five years, and when he put on those special endochroma glasses, he was overwhelmed by the intensity of what he saw. Magoffin's entire world burst into focus.

"Ohhh, man," Magoffin said, fighting back tears as the school's study body cheered. "I could not begin to express what I see because you guys already see it." 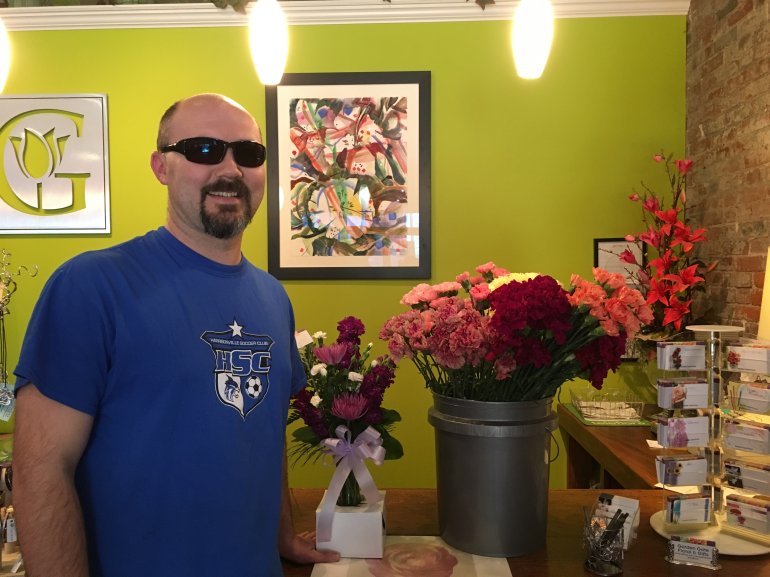 Magoffin says he hadn't purchased the glasses before now because he can't afford them. His wife encouraged him to try them on recently during a vacation, ensuring they'd allow him to see. Students from Harrisonville High School's art department raised the entire $740 to purchase the spectacles.

Seeing colors for the first time in his life, an ability many people take for granted, is an overwhelming rush.

"It's like living in a world with the lights off, and you've always known them to be off, and somebody turns them on," Magoffin beamed.

Magoffin tooled around the school gymnasium and courtyard, experimenting with his new glasses, which resemble a pair of high-end sunglasses. He'd never seen a blue Missouri sky or a green evergreen tree until Friday morning.

Harrisonville High seniors Randi Buerge and Jadyn Gilbert are among the legion of art students who helped make the money for the glasses, staging a giant painting party called "Cupcakes and Canvas." They say it's a warm feeling knowing Magoffin can now see colors as clearly as artists do.

"I paint a lot of landscapes, and if I couldn't see what colors were in my picture, then, it wouldn't look like a landscape. It wouldn't be right," Buerge said. "And now, he can see it."

"It's an extremely intense sensory event, if you were to ask a science teacher. You're perceiving things you have no knowledge of," Magoffin said.

"I remember last year, I died my hair blue," Gilbert told FOX 4 News. "He went up to me, and said, 'Jadyn, is that blue or purple?' Now, he'll be able to tell the difference."

Magoffin says he's seen as being a tough teacher and he appreciates students who see academics as a high priority. He says he'll spend his first day with the new glasses selecting flowers for his wife, a task he's never been able to do on his own.

The National Eye Institute says as many as eight-percent of men can be affected by colorblindness, so long as their roots trace back to Northern Europe. Magoffin says he'd seen social media videos where other colorblind people tried on the endochroma glasses, but he never dreamed he'd receive a pair.

KANSAS CITY, Mo. -- Even during social distancing, life doesn't shut down at the Kansas City Zoo.

Zookeepers and staff are working hard to make sure the animals that call the zoo home are well cared for during the time it's closed.

KANSAS CITY, Mo. -- In yet another surreal sign of the times we’re living in, websites offering people a free (or close to free) way to create a living will are seeing a surge in interest. But as with most things, the devil is in the details. “I think the first thing to think about is not to act out of panic,” said KC attorney E. E. Keenan with the…

The first US service member has died from the novel coronavirus, the US military announced on Monday. An Army National Guardsman from New Jersey passed away on Saturday, according to a statement from the Department of Defense. Gen. Joseph Lengyel, the chief of the National Guard Bureau, identified the service member as Army Capt. Douglas Linn Hickok. "Our thoughts are with his family & friends. All of us are likely to know people…