KANSAS CITY, Mo. — It’s been 10 years of fun and fundraising.

The Big Slick hits the decade mark this year, having raised over $8 million for Children’s Mercy Hospital. This year’s comedy show, the main event of the weekend of philanthropy, is set for Saturday night.

A week centered around generosity drew one of comedy’s biggest names to the metro.

On Wednesday, Rob Riggle, who’s been at the heart of the annual Big Slick fundraiser for Children’s Mercy Hospital for all 10 years, paid a visit to the staff at American Century Investments as their employer rewards them for their hard work with a food truck festival in their parking lot on Main Street. The proceeds from the food trucks were also donated to the hospital.

“Thanks for coming outside on this hot day,” Riggle joked, addressing a tickled crowd. “It’s either this or stay inside and work.” 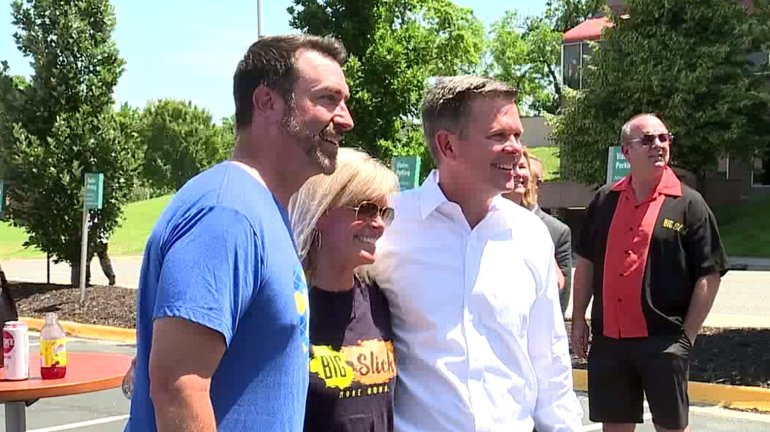 The cause is fairly serious, but as he should, the comic keeps the laughs alive.

The Shawnee Mission South grad, along with his Hollywood pals, have spent nine years having fun and raising millions of dollars from sick kids all the while.

Riggle reminded everyone that he produces the comedy show along with actor friends David Koechner, Paul Rudd, Eric Stonestreet, and Jason Sudekis.

“No parent should ever have to go broke or not be able to provide their child with care because of money. Children’s Mercy Hospital gets in there and does the most amazing work. I’m always grateful,” Riggle told FOX4.

American Century Investments, according to Riggle, has donated a huge chunk of its profits to the hospital every year.

Its employees said they were happy to welcome in Riggle, who rose to fame thanks to early roles on “Chapelle’s Show,” “The Office,” and “Arrested Development.”

“We have a partnership with Children’s Mercy and with the Stowers Center for Medical Research. We really enjoy giving back to our community. It’s a big priority at our firm,” said Katie Staudacher, an employee at American Century Investments.

“It’s nice to see a guy from the area come back and donate his time and energy and efforts. Being a celebrity and a personality, it brings more attention to the event, which is great,” said Justin Erker, another of the firm’s employees.

Past events involving the Big Slick celebrities, including Riggle, have included their celebrity softball game, poker tournaments, bowling events and visits with sick kids at Children’s Mercy Hospital and their families.

“They’re saving lives over there every single day and changing lives, in my opinion,” Riggle said.

For the first time, the Saturday night Big Slick comedy fundraiser moves from the Midland Theatre to the 6,000-seat Sprint Center.

Riggle said he hopes he and his team can reach their goal of raising $10 million for Children’s Mercy Hospital in only a decade.

There are still a few tickets remaining for the show, proceeds from which go to the hospital. Riggle estimated 95% of them were already sold. You can learn more about the fundraiser by clicking this link.

Schools are reopening, amusement parks are welcoming back visitors, and outdoor dining is the new way to eat out. But despite the signs that life is returning back to normal, the coronavirus pandemic has gone nowhere.

That's why a group of researchers at Duke University created a simple technique to analyze the effectiveness of various types of masks which have become a critical component in stopping the spread of the virus.

TOPEKA, Kan. — Democrats are pinning their unusually high hopes for winning a U.S. Senate seat in Kansas for the first time in almost 90 years on a retired doctor and former Republican who vexed conservatives with her support for Medicaid expansion and abortion and LGBTQ rights.

State Sen. Barbara Bollier represents a Kansas City-area legislative district in the same cozy and affluent suburbs along the Missouri state line where she grew up. She's pitching herself as a “voice of reason” with a decade's worth of working with lawmakers from both parties.