The Bethel AME Church was built and consecrated in 1868. It's been on 202 Henry Street since then -- until Monday.

Prior to the Civil War, AME Church was mostly limited to the free states of the Northeast and Midwest. After the fall of the confederacy, congregations grew south of the Mason Dixon Line. By 1880, there were about 400,000 AME Church members.

Bethel was the first AME church constructed and in 2010 became the last to close its doors.

The church has been vacant since then and was bought by a Chillicothe car dealership for additional parking space. The owner donated it to the Grand River Historical Society and Museum.

“It has 150 years of history. It`s part of the culture and heritage of the community,” said Pamela Clingerman, the curator with the Grand River Historical Society and Museum. 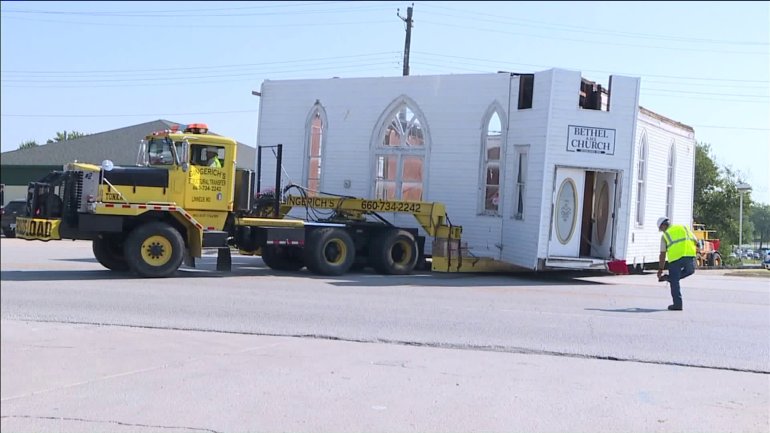 With the help of various agencies, the Bethel AME Church was moved from its 150-year-old residency at 202 Henry Street to McNally Street, which is adjacent to the historical society.

“This building is believed to have been the first African Methodist Episcopal Church built north of the Missouri River after the Civil War,” Clingerman said.

To prevent history from being lost, the owner donated the property to the museum.

“It would have been a loss of part of the history of Chillicothe,” said Frank Stark, a Chillicothe resident.

“We want to preserve the church as close as possible to what it was originally. We`re going to have it as a historic site in its own right, plus have exhibits on black history of the region,” Clingerman added.

It's about 2 miles from point A to point B, but it took hours and some serious coordinating to get the church to its new home.

The church sanctuary, re-attached roof and steeple will be re-established on the new basement. The sanctuary will function as part of the museum, and the new basement will be used for classrooms and exhibit space.

“We`re known as the home of sliced bread, but we`re much bigger than that. So 150 years of history, that`s really important. It`s one of the oldest buildings in the community,” Clingerman said.

“If we don`t preserve things like that, our past is going to be gone, and no one will know it. Our past should be part of all of our lives, no matter what our age is,” Stark said.

Thanks to various foundations and private donations, the museum received thousands of dollars to make the move happen. But they are still short and are fundraising on the museum's Facebook page.

AMORET, Mo. -- At least two people are reported to be injured and one person has been taken into custody following a stabbing Monday afternoon in Bates County. Deputies responded at 12:30 p.m. after multiple before were reported to have been stabbed at a home in Amoret, Missouri, according to the Bates County Sheriff's Office. When deputies arrived on seen, one woman was immediately taken into custody. Deputies found one…

TERRE HAUTE, Ind. — An Indiana man with a “Crime Pays” tattoo on his forehead has been arrested after yet another police chase.

According to the Terre Haute Police Department, Donald Murray was charged with resisting law enforcement, reckless driving, possession of methamphetamine, maintaining a common nuisance and auto theft after the short pursuit Monday morning.

AUSTIN — A Texas woman spotted a striking insect standing out against the backdrop of her garden Sunday – a pink grasshopper.

Angela Barger snapped a photo of the grasshopper at her home in southwest Austin, and come to find out, there aren’t many pink grasshoppers around.