NEW ZEALAND — A seven year old child has invented a holiday that could rival Black Friday. A Facebook post from user Jax Goss describes the holiday as celebrating the Spirit of the Wolf, who brings and hides small gifts around the house for everyone. 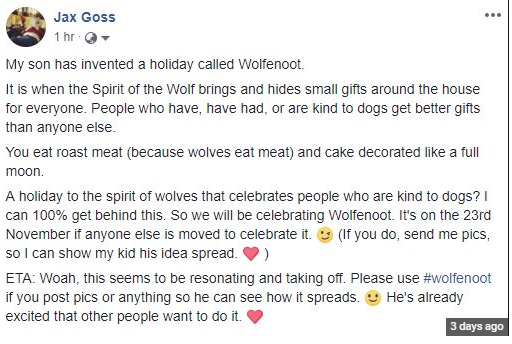 The holiday is for those who are kind to dogs. Wolfenoot is on November 23rd. Wolfenoot has gone viral with the hashtag #WolfeNoot on Twitter and Instagram. Reddit users have taken to discussing whether this made-up holiday will actually be a success or a dud. The website wolfenoot.com has already been claimed. It includes an FAQ to teach people how to pronounce Wolfenoot, and it discusses whether the holiday is always on November 23rd.

The actual holiday was created in New Zealand and has no intentional ties to Thanksgiving or Black Friday.

The holiday campaign also encourages people to donate to shelters, wolf sanctuaries, and dog based charities.

Wolves have already been part of a number of major mythologies and holidays. In Roman mythology, Romulus and Remus are twin brothers, whose story tells the events that led to the founding of the city of Rome and the Roman Kingdom by Romulus. The twins were said to be raised by a wolf.

Fenrir is a major wolf figure in Old Norse mythology.

Dogs are a subspecies of the wolf and are the first species to be domesticated by humans.

In Nepal and the Indian states of Assam and Sikkim, there is a five-day-long Hindu festival called Tihar. On the second day, Kukur Tihar, people offer garlands, tika, and delicious food to dogs, acknowledging the friendship between humans and dogs. Stray dogs in the streets also take part in the festival. The dogs receive special treatment on the day.