KANSAS CITY, Mo. — What appears to be the fiddle of one of country music’s all-time greats is sitting at a Kansas City-area Goodwill warehouse right now.

Fox 4 has uncovered how Roy Acuff’s fiddle ended up being donated. It’s a mystery that’s even been baffling employees since bids for the prized fiddle began to skyrocket.

Goodwill of Western Missouri and Eastern Kansas gets 15 million pounds of donations each year. But they rarely get something reported to once have belonged to “The King of Country Music.” 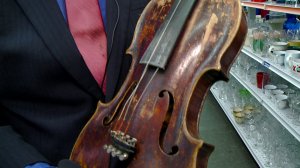 Roy Acuff and his Smoky Mountain Boys played the Grand Old Opry as early as 1938. He almost always had his fiddle. He was the first living member of the Country Music Hall of Fame and even has a museum dedicated to him in Union County, Tennessee.

“His personality would have got him to the moon if that’s where he wanted to go,” said Martha Carter, treasurer of the Union County Historical Society.

When a fiddle bearing the Acuff name was donated to the Kansas City Goodwill store on North Oak, “it shut the shop down,” according to Gary Raines, manager of Goodwill’s e-commerce program.

“We were looking things up, playing the music. People were talking about it,” he said. “It was just very exciting. Like everybody else, we are going, ‘What? We can’t believe this!'”

Along with a sticker marking the fiddle as being handcrafted by Acuff’s Uncle Evart in 1945, the fiddle came with a letter detailing its history, including the sale to Roy for $125.

“It was made from an apple tree wood grown on the Neidman farm, which was Evart’s sister and brother-in-law,” the letter reads.

Bidding for the fiddle started at $5, but by Wednesday night bidding had reached $7,779.77.

“This is not in great shape, but part of it’s the story and the history,” Raines said.

So did the donor know what they had? Raines said Goodwill staff had no idea who made the donation.

However, the letter with the donation included pieces of correspondence between the Acuff family and an Alabama man.

Fox 4 reached his widow, Mildred Peek, who said her husband, a fiddle player, discovered the instrument decades ago at a pawn shop. She gave it to his brother here in Kansas City when he died.

That donor wished to stay anonymous but said he wanted to help Goodwill and was anxious to see the fiddle restored to its former glory.

“This is a piece of history, of Americana. From ‘Great Speckled Bird’ to ‘Tennessee Waltz’ to ‘Wabash Cannonball,’ all that was played on this instrument,” Raines said.

Goodwill’s auction for the fiddle ends at 11 p.m. Saturday.

Shelter in Place: One injured in Ill. warehouse fire

Can you catch monkeypox from surfaces?