For the second time in 6 years, GT Towing lost a driver. Stewart was killed Sunday night near Interstate 35 and North Brighton Avenue while helping a stranded motorist. The suspected drunk driver who hit Stewart fled the scene but was later taken into custody and charged in his death.

For everyone who knew the 39-year-old tow driver, it’s just unbelievable.

It was a moving and powerful sight on Wednesday night. Several hundred tow truck drivers, one by one, turned on their lights and lit up the church’s parking lot as a tribute to Stewart. 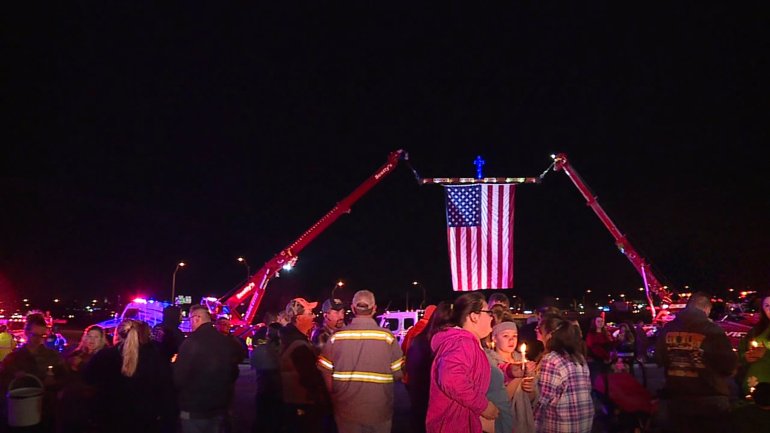 “Johnny was a very outgoing kind of guy,” said Amy Gresham, Stewart’s boss. “He made everybody laugh all the time.”

But no one was laughing Wednesday night. Instead, heavy hearts mourned the 44-year-old gone too soon.

“He was like a son to me,” Stewart’s aunt Mary Derstler said. “I had him with me most of the time until he got married. I loved him.”

“He was a big teddy bear. He would give you his shirt if you needed it,” his niece Daryanna Huffman said.

Wednesday night, there were a lot of tears and warm hugs for Stewart’s grieving wife. Stewart’s funeral will be held Dec. 1, which would have been he and his wife’s 12th wedding anniversary.

“We shouldn’t be grieving that’s the thing,” said Hannah Edmisten, a relative. “That’s what makes me so angry about all of this — that this shouldn’t be happening.”

An no one could keep their eyes off the bright blue cross and huge flag that blew in in the wind over Stewart’s truck and a poignant message for drivers: Move over for Johnny.

“We are putting our life on the life for the people that are broken down on the side of the road every day, 24 hours, 365 days — every single time we step out, every time we wake up it could be our last day,” said JR Main, a fellow tow driver.

Nearly 100 vehicle break-ins being investigated in …

Students think they were drugged at Belton dance

Support Hurricane Ian relief with a donation to Red …