LEE’S SUMMIT, Mo. — Hundreds made their way to Abundant Life Church in Lee’s Summit to pay their final respects to a Washburn University football player who was shot and killed last week.

Twenty-three year old Dwane Simmons was tragically killed after being gunned down leaving a party in Topeka on April 28.

The many lives touched by Simmons evident as mourners filled the church.

“All my life I thought he was just that special to me, but he was special to everybody. I think that goes a lot to say about the kind of person he is,” close friend of Dwane, Logan Cheadle said.

“They did a video of his life. A story. They showed much a fun and jovial side. Him as a dancer, him as a model Him as a singer. It was the cutest thing. It brought tears to my eyes. You could tell he was the life of everybody’s party,” a cousin of Dwane, Vonda Randle Cloyd said. 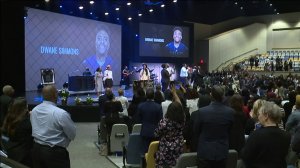 Corey Ballentine helped carry the casket. He was shot too that night as they celebrated Ballentine’s selection into the NFL. Ballentine presenting the jersey and helmet of Simmons to his parents.

Tributes and reflections by many who said the same thing, Simmons had an infectious personality, he was a fierce competitor and friend, and had a smile they will never forget.

“I’m going to remember the little kid who grew up to make an impression, not just in Kansas City, but in Topeka, Kansas. Washburn University had one whole side of the church. They stayed the whole entire time. It speaks volumes of the type of young man he was, I tell you, You can tell the community loved Dwane,” Cloyd said.

Topeka police have not arrested anyone for the shooting.

If you have information, you are urged to contact police.

RAYTOWN, Mo. -- Raytown police shot and wounded a suspect Sunday evening in the 6000 block of Kentucky.

The Missouri Highway Patrol is investigating the officer-involved shooting and say no officers were hurt during the incident. Raytown officers were originally called to the scene just before 5:30 p.m., for a disturbance with someone who possibly had a weapon, no further details about the initial incident have been released.

With travelers staying close to home and airports turned into virtual ghost towns, rental car companies have taken a huge hit during the coronavirus pandemic. On Friday Hertz, which also operates the Dollar and Thrifty agencies, declared bankruptcy. Industry experts expect the company to sell off a large portion of its fleet.

And that should bring about some deals car shoppers might very well want to consider, experts say.