Jolie Justus and Quinton Lucas got the most votes of all 11 candidates in a primary election April 2. In the last month, they’ve faced off four times, including Tuesday.

There were about 250 people at the forum. Justus and Lucas spent half an hour answering questions from Kansas City Star reporters, people from community groups and audience members. 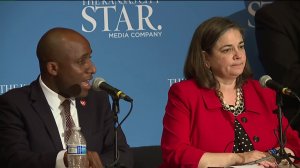 Are you going to raise taxes? Should the baseball stadium move downtown? They both said no to those.

They spent a lot of time talking about affordable housing in parts of the city that really need help, fair economic development across the city and improving Kansas City schools.

The last question tonight came from moderator and KC Star reporter Dave helling. He asked about the crime in this city. Both placed emphasis on helping people on the front end, before crime happens.

“When you look at so many of the issues our police are dealing with every day, it’s mental illness in our community. It’s trauma. It’s intimate partner violence,” Lucas said. “It’s those fundamental things that we need to address to a social work, public health lens far more than just an incarceration type of lens.”

“And while it is important to make sure that our most violent offenders are behind bars, the reality is most of the folks we’re locking up or people who are suffering from mental health issues, people are suffering from addiction issues, and we need to change the way were doing things,” Justus said. “And that’s something that I’ve been focused on in my career.”

You can watch the full forum in the video player below to hear the candidates’ full responses to these questions and many more.

Both are current city council members. Justus grew up in Branson, has a background in law and politics, and is focusing on “stronger Kansas City neighborhoods.”

Lucas was raised in Kansas City’s urban core. He has a background in law and teaching. His website says he wants to “make sure everyone can succeed no matter their zip code.”

The most recent poll data was released about this time last month. Lucas led with 38%, Justus had 31%, and another 31% remained undecided.

FOX4 is partnering with the Kansas City Star to host the next forum, 6:30 p.m. on Monday May 20, at Rockhurst University.

Here are some of the upcoming forums that are free and open to the public:

KANSAS CITY, Kan. -- Police have identified the two people who died after back-to-back shootings on June 28 and June 29.

Police responded to the shooting near N. 47th and Wood Avenue at 9:30 p.m. on Sunday, June 28. When officers arrived, they found a man who had been shot and was already dead.

JEFFERSON CITY, Mo. — The St. Charles prosecuting attorney is speaking about his decision not to retry the case of man who was released from prison after the help of an WNBA star.

Jonathan Irons, 40, walked out of the Jefferson City Correctional Center earlier this week a free man. It comes after years of work by WNBA star Maya Moore and other supporters who argued he was falsely convicted of burglary and assault charges. She was on hand for his release.

KANSAS CITY, Mo. — Kansas City's mayor says the Missouri Republican Party is lying by connecting the push for local control of the city's police department with broader calls to defund the police.

The head of the Republican party this week said Democratic gubernatorial candidate Nicole Galloway supports defunding the police because she supports local control of the Kansas City Police Department. The statement pointed to Galloway's twitter, where she expressed support for the Black Lives Matter movement, including their push for local control.