LIBERTY, Mo. – A Liberty man is trying to find the families of two Navy sailors, so he can reunite them with pictures he found of the veterans.

James Large was helping a friend clear out a wreck Winnebago at a scrap yard, off I-435 and Truman, when something caught his eye.

“I didn’t think anything of it at the time,” he said. “I just grabbed it because I knew they were old and were from the war-era.” 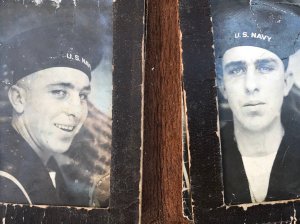 Scattered between a pile of papers he was planning to throw in a burn pile was a brown wallet with a green checkered design. Inside were two pictures of U.S. Navy sailors.

“Somewhere, there is someone who knows both your names,” he said. “I want these guys to go home to whoever they belong to.”

The pictures are in good shape, but there are no names written on the back of them. The only identifying factor James could make out was that the men likely served during World War I.

“The [flat hat] … they stopped doing the [blue wool] caps after World War I, so I knew that these were WWI photos,” Large said.

James, who comes from a military family, has held on to the pictures for a few months. On Veterans Day, which happened to be his 50th birthday, he told himself it was time to reunite the pictures with the people who knew the men.

“If you ever had someone that you loved, that you lost, and all of sudden a picture of them came back, that’s what you’d want and so I want these guys to go home,” he said.

James wrote the following poem about the lost photos:

“Found in wreckage, you were doomed to fade

No matter what you did, or if there were lives you saved

Somewhere, there is someone who knows both your names

Who may have dreamed of you even as they prayed

I found you laying in the wreck, nowhere to go, only loneliness left.

I couldn’t leave you and just forget, someone else loves you yet.

May someone recognize your faces, who had seen you in different places

Or who was close to you, before time erases

The memories these pictures replace.”

If you recognize the men in the pictures, send FOX4’s Zac Summers an email at zac.summers@fox4kc.com. You can also send him a Facebook message by clicking here.

Wife mourns loss of husband who drowned at Unity …

Standoff shuts down I-435 for hours

Man pleads no contest to rape at child welfare office

Suspects in KS Amber Alert could face slew of charges