DOUGLAS COUNTY, Kan. — An Ottawa man found himself right in the path of Tuesday’s tornado with nowhere to hide.

Now Terry Seymour is recovering at home after being treated at Lawrence Memorial for a broken shinbone.

“As soon as it happened, I knew it was broke because my leg, it just flopped,” Seymour said.

The 47-year-old dad was driving west on K-10 from Eudora, Kansas when he came face-to-face with an EF-3 tornado that touched down in Douglas County before later strengthening to an EF-4 in Linwood, Kansas.

“I had gotten the alert on my phone and my wife sent me a notification that the tornado was on the way,” he recalled.

He pulled over to the side of the highway and attempted get out of his Jeep to lay in a ditch, but the wind was too strong and threw him like a “rag doll.”

“I guess I was scared but I was more in survival mode,” he said.

He thought he might be better protected from the elements if he crawled back near his vehicle.

“At that time, it felt like it would safer at the Jeep, having at least a little bit of a wind break because, even halfway down the ditch, I was still getting clobbered with the winds and the rain,” he said.

But the SUV went airborne. 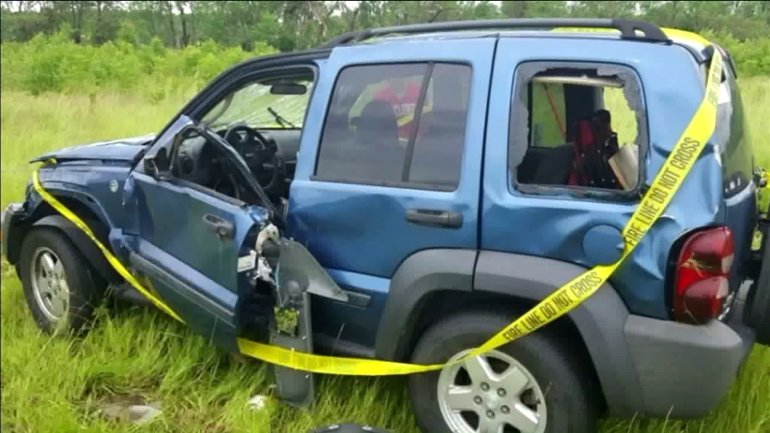 “I saw the Jeep lift off the ground, and it went over my head, and my first thought was, ‘This is just like in the movies,’” Seymour said.

The Jeep came crashing down, breaking Seymour’s shinbone, before it rolled further down the ditch.

“It was pretty brutal, pretty violent,” he said of the storm.

Once the wind died down, Seymour said a good Samaritan named Tracy stopped and waited with him until EMS arrived.

“I laid outside of her car, and she comforted me,” he said. “I’m very thankful for her.”

Surgeons at Lawrence Memorial had to insert a rod below his knee to stabilize Seymour’s broken bone.

“If it had landed anyplace else besides my leg, I don’t think I would be here,” said.

His son and wife are happy he’s alive and in good spirits. Seymour’s just grateful that his family wasn’t in the jeep with him.

“That would’ve been a much harder situation to deal with [if they were in the Jeep],” Seymour added. “All in all, I’m very lucky.”

Seymour said it’s unclear how long it will take before he’s back on his feet, but he’s expected to make a full recovery.

Douglas County officials said 17 people were injured in Tuesday night’s severe storm and tornado. Three of them were still hospitalized as of Wednesday evening.

For suggestions from NOAA on what you should do if you find yourself in the path of a tornado, click here.