Dennis E. Schoellhorn, 56, was a passenger in a red Ford Fusion that was traveling southbound Friday on Charlotte Street when it was hit on the driver’s side by a Ride KC bus that was headed westbound on 25th Street. 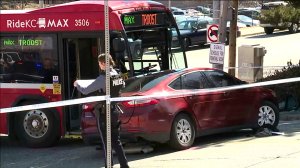 The Independence man, who was sitting behind the driver, was taken to a nearby hospital with critical injuries. He later died from his injuries.

More than a dozen other people were also taken to nearby hospitals. The adult female driver, a two-year-old child in the car, the bus driver and 10 bus passengers were taken to hospitals, but none of their injuries were considered life-threatening.

There’s a sign at the intersection that says “cross traffic does not stop.” Sources tell FOX 4 the sign would have given the bus the right-of-way.

WASHINGTON (NEXSTAR) -- President Joe Biden's $1.9 trillion COVID aid package is in the final stretch on Capitol Hill and moving closer to a vote in a divided Senate.

Senate Democrats made some last-minute tweaks to the bill on Wednesday trying to keep Democratic members on board. But Republicans remain united against the package.

LEE'S SUMMIT, Mo. -- Kidding Around Child Development Center in Lee’s Summit, is where Kelly Stakley said she trusted employees with her three-year-old son, James, up until last month when he came home with a bruise on his face and rear.

Stakley said she tried to find out what happened and the answer an employee gave her wasn't good enough.

Stakley says James was dropped off at Kidding Around in Lee's Summit and came home a bruise on his rear.

KANSAS CITY, Mo — Mayor Quinton Lucas says pothole repair is the topic of most complaints to his office.

The battle against bumps in the road will now include use of high-tech gear used by city workers — small cameras that are already mounted on city garbage trucks. They’re called Rubicon cameras, and according to city leaders, it will cost $300,000 to install them on city pothole trucks.