INDEPENDENCE, Mo. – An Independence mother is upset after her 11-year-old son came home with carpet burns on his forehead, and she claims his teacher did it.

Shayla Brown admits her son, Eric, has behavioral issues and that he’s been restrained before for lashing out. But she believes his teacher at Great Circle went too far this time.

“If my son’s in the wrong, believe you me, I have no problem addressing it, but somebody got mad and went over the top,” Brown said.

Brown said she flipped out when Eric came home Monday with bright red scars on his forehead. He told his mom he got into an argument with another student, and his teacher asked him to leave his 6th grade classroom.

Great Circle is a statewide nonprofit that partners with school districts to offer classes for children with behavioral issues. Brown’s son started attending the school in the fall. 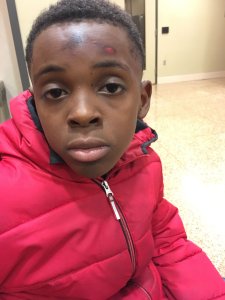 Brown called the actions by her son’s teacher excessive, and to make matters worse, she said the school never called her about the incident.

She said when she did hear from the school’s director the next day, he wanted to know why her son wasn’t in class.

She explained her frustration with how the incident was handled and said the school’s director told her the nurse and/or therapist who usually contact parents when incidents occur weren't at school Monday.

“I don’t care who was there,” Brown said. “If an incident goes on with a person’s child, especially something that drastic where I take him to school normal one minute and he comes home different, I should’ve been notified.”

Brown took her son to the hospital where he complained of having a headache, but a doctor told her it was too early to tell whether he suffered a concussion.

“She did say there was a big abrasion on his head and that didn’t just come from a regular fall,” Brown said.

She also filed a police report, claiming her son was assaulted, with the Independence Police Department. A spokesman with the department confirmed the case was part of an open investigation.

“When you don’t do your job and address what actually happened, and the kid has to come home and tell me, that doesn’t look right,” Brown said.

Brown would like to see the teacher disciplined and said she spoke up because she doesn’t want to see another child have a similar experience.

“I want the teacher to take full responsibility as well as the school, and I want them to change the way they do things,” Brown said.

Brown said she’s currently working with the Independence School District to find a new school for her son to attend.

FOX4 reached out to Great Circle, but they would not acknowledge nor comment on the incident.