KANSAS CITY, Kan. — Multiple law enforcement agencies are still on the search for an inmate that escaped the Lansing Correctional Facility Monday. 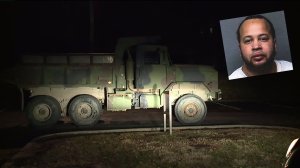 Green wasn’t on a work release program but had a job inside of the prison. He was last seen around 11:45 a.m. Monday. Officials said around 1:20 p.m. the warden ordered an emergency head count, and that’s when they realized Green was gone.

He is described as 5-foot-4, weighing about 200 pounds. He was last seen wearing blue jeans and a blue t-shirt. See his photo below.

Officials said he should be considered dangerous. The KCK native has been in and out of prison and jail since 2000 for charges such as forgery, burglary and, most recently, aggravated battery causing great bodily harm. That’s why he’s spent just over four years at Lansing Correctional Facility.