KANSAS CITY, Mo. — Instincts kicked in for one Kansas City, Mo., police officer who delivered a baby boy in the parking lot of a convenience store on Thursday night.

Officer Ryan Taylor was about to start his off-duty job when he entered the Snappy Store on W. 12th Street in the West Bottoms to grab a drink.

“I wasn’t thinking,” he recalled. “I was just doing. I was just acting, just with that human instinct, that I have to do something.”

While the father was on the phone with 911, the mother began pushing in the passenger seat – and within minutes, Taylor single-handedly delivered a healthy baby boy named Jack.

“He took his first breath in my arms and it was emotional,” said Taylor, who is just 29 years old and has no kids of his own. “It was just amazing. It was quite a gift that baby gave me.”

He learned how to deliver a baby in the police academy, but Taylor admitted it was a tad scary stepping into the role of doctor.

“I got this little life in my hands, and this is real,” he said. “This isn’t a TV show. This is a human being entering into our world and I’m responsible right now.”

But he handled it like a pro, and his glow was evident when EMTs arrived.

“He was very, very excited,” recalled Cora Riley, an EMT who responded with the Kansas City, Mo., fire department. “Like it was his own baby being delivered. It was great.” 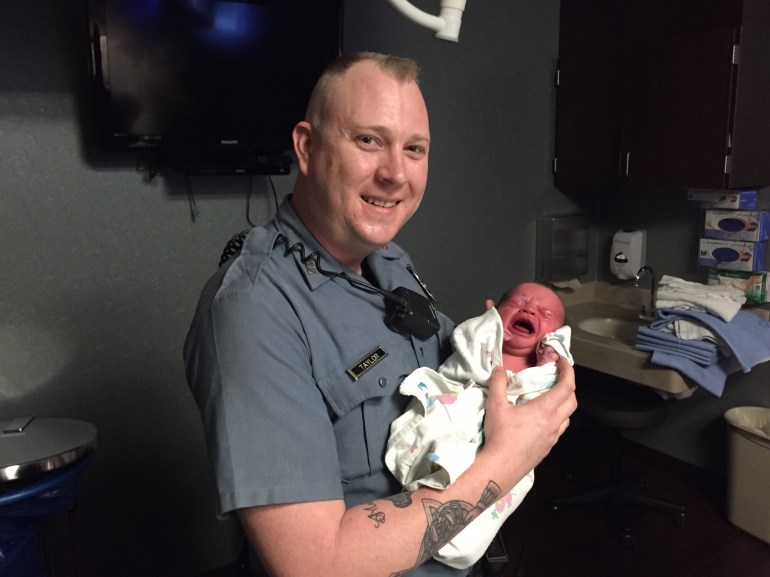 Taylor said he forged a unique bond with little Jack – one that only grew deeper when he later visited the hospital to deliver a birthday card and stuffed animal, and to take their first picture together.

“Seeing that little person in my arms,” he said, “and it’s just like, ‘Oh my goodness. Here you are, little man.’ This is the best. Honestly, I don’t think I am going to encounter anything in my career that’s going to top this.”

The family lives about an hour drive north of Kansas City and declined media interviews Friday. Taylor plans to keep in touch with them and said he is excited to see baby Jack grow up.