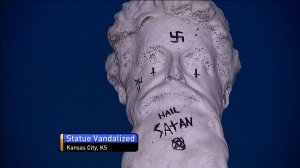 Someone vandalized the historic John Brown statue with racial slurs.

It’s unclear when the John Brown statue was vandalized but the graffiti is still up Sunday night.

Written on it, racial slurs, a swastika, and the words “Hail Satan.”

The vandals not only targeted the John Brown statue, but they also tagged a nearby audio tour sign with the n-word written several times.

Also on the statue, inverted crosses which in Christianity has been linked to St. Peter being crucified upside down, but it’s also believed to be a Satanic symbol.

Someone also tagged the letters HCG on the statue which is synonymous with the Hoover Criminals, an African American street gang.

Loretta Norman has lived in the neighborhood for 91 years. She doesn’t think this was done by anyone in her neighborhood but rather an outsider.

“You know, everybody’s got their own thoughts now days, their own minds, and it seems like it isn’t for the right reasons. I would say that. Seems like it’s divided,” Norman said.

Norman said she passes the John Brown statue everyday and didn’t know it had been vandalized until we told her.

The site was established by abolitionists and was an important station on the underground railway, according to KansasTravel.org.

The statue was covered by plastic on Monday.

Police Chief Terry Zeigler tweeted Monday that a KCK officer who owns a side business that does monument work will be donating his services to remove the graffiti.

Officer Vallejo is going to donate his services to clear the statute when it stops raining. He has a side business that does monument work. https://t.co/RXqu3cvn3I

KANSAS CITY, Mo. -- The Missouri Department of Transportation announced it will break ground on the new Buck O'Neil bridge over the Missouri River on Wednesday, June 23, 2021.

The current bridge carries thousands of drivers over the Missouri River every day, and is nearing the end of its lifespan.

KANSAS CITY, Mo. -- An assistant Jackson County Prosecutor will be remembered through the office's intern program.

JoEllen Englebart died Jan. 2, 2021 after testing positive for COVID-19. The 32-year-old gave birth to a baby boy shortly before her death, but family said she was never able to hold him.

SHAWNEE, Kan. — A state-wide backlog is preventing Kansans with disabilities from gaining access to the services they need.

Johnson County officials estimate over 4,500 people with intellectual and/ or developmental disabilities (I/DD) have been placed on a waiting list to receive Medicaid funded support waivers from the state.

Sinkhole closes street in Mission; expected to impact traffic through the weekend