OLATHE, Kan. -- A man who was discovered in a Lenexa storage unit with his wife's dismembered body and two children was sentenced to nearly 9 years in prison on Friday, following two delays in his sentencing.

Justin Rey received a 104 month sentence, more than 8-and-a-half years, and must register as a sex offender.

Rey, 36, was charged and convicted in Johnson County with two counts of aggravated child endangerment, two counts of child misconduct and three counts of possession of child pornography. 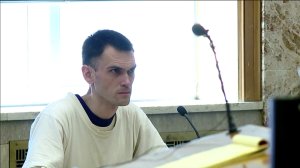 In October 2017, Rey and his 2-year-old and newborn daughters were discovered in a U-Haul storage unit in Lenexa. Also in the storage unit, the body of Rey’s wife, which had been dismembered and stored in a rolling cooler.

Witnesses told the court they saw Rey leaving the hotel, dressed up as a woman, wearing a rain coat and wig. He was allegedly seen dragging a cooler with the body of his wife inside. Witnesses said he left bloody sheets behind in his room.

The manager of the storage facility testified that an alarm went off overnight because Rey and his two children were spending the night there, which isn't allowed. It was winter and the storage until was near 45 degrees, the manager said, a dangerous environment for a newborn baby and a 2-year-old.

In the morning, the manager confronted Rey about sleeping there. The confrontation was caught on video, and Rey can be heard saying that his wife died.

Although there was a lot of testimony about Jessica Rey's body, Justin Rey is not charged in her death. Jessica Rey is believed to have died in the KCMO hotel room. For allegedly dismembering his wife, Justin Rey is facing an abandonment of a corpse charge in Jackson County.

Testimony provided Wednesday revealed that Rey planned to takes his wife's body to an Indian reservation in Arizona, by taking an Amtrak train.

During the investigation, in a effort to prove that he didn't kill his wife, Rey allegedly gave his phone to the police so they could check it out.

Investigators said the phone's camera roll appeared to show girls younger than 18. There were also screen shots, one of which showed children in a nudist camp. There were also allegedly searches for "nudist teen" on Rey's phone.

Prosecutors questioned Rey about the search for that phrase. He said he would have been sleeping and didn't know who did it. The only other adult with him in his hotel room at that time was his wife. He said she didn't do it either.

He suggested that police interfered with the investigation.