KANSAS CITY, Mo -- The Kansas City Royals unveiled their newest piece of art that will be displayed in the main lobby at Gate C of Kauffman Stadium. The six by eight-foot painting is by Kansas City artist, William Rose. It depicts the on-field celebration of the team in Citi Field last November when they beat the Mets in Game 5 to become World Series Champions.  In the backdrop, are the 800,000 Royals fans who welcomed the team home at the parade and then rally at Union Station.

The painting took Rose about a week to sketch, and then altogether about six weeks to finish.

Rose was thrilled that the Royals commissioned him for the painting.

"I can't even tell you. Just pinching myself everyday when I've been working on this thing that I got the honor to do this and it will be there forever. It's so cool," Rose said. "I've been a Royals fan forever, grew up a Cubs fan in Chicago, but quickly became a Royals fan when we moved here. I was so excited. I love the Royals."

Rose has done other sports paintings, most recently he did 16 paintings for Texas A&M's stadium.

"I don't have anything in Arrowhead yet, but in case they're watching…" he laughed.

He said he used mostly palette knives in order to add texture.

"The last thing I did was a little water spray. I love that. It's perfect," he said of the water he painted shooting out of a water bottle as they celebrated.

He said the painting began with a photograph from Getty Images. They received permission to use an image from Getty's World Series photo library.

However, Rose had to make some adjustments.

"Like Alex Rios wasn't quite in place," he explained. Rios was a little farther away and wouldn't have been in the shot.

The depiction of Wade Davis is "actually him after he threw the last pitch on the mound," Rose said. And he had to make an adjustment for Alex Gordon, who was hunched down lower in the Getty photograph. 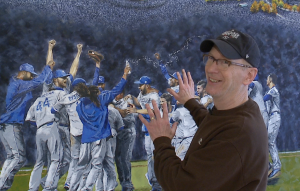 The painting can be seen and appreciated in the home plate gate- Gate C.

"Currently there's a much smaller painting there that celebrated the 85 World Series, I believe. So, they're going to locate that somewhere else and put that right there," Rose said.

When FOX 4 asked him if there's anything he would change about the painting, Rose said: "I might put myself in there. I'm actually in the crowd up here," he said as he pointed to a faraway spot in the rally crowd.

Rose was assisted by Paul Dorrell and his Leopold Gallery, who helped conceive the design and provided the necessary feedback to complete the project. The background shot of the large gathering at Union Station is that of photographer Roy Inman, who allowed Leopold Gallery to use the image.

As the spring progresses, reproductions of the painting will be available through a variety of means, including t-shirts, posters and signed limited edition Giclee prints.