The 8-4 vote came after nearly an hour of debate among council members. It’s a debate that’s been going on at KC City Hall and throughout the city over the last year or so.

In the fall, Councilman Quinton Lucas introduced an ordinance to rename The Paseo to “Martin Luther King Jr. on the Paseo.” Since the ordinance’s introduction, a vote has been delayed five times.

But on Thursday, council members voted to remove “on the Paseo” from the name and then approved “Dr. Martin Luther King Jr. Boulevard.” It appears they were ready for that change, as several council members later joined a group of pastors outside the council chambers, hoisting the new street sign.

Of course, there are a lot more signs to be added on the 10-mile stretch of the newly named boulevard. It will cost about $60,000 to make the change and is expected to be complete in 3 to 6 months. 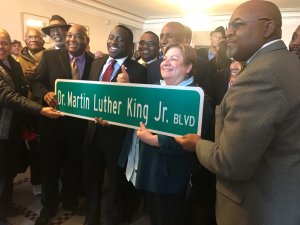 The debate prior to the vote was heated at times with voices rising and several council members sharing conflicting viewpoints.

Part of that debate came from Councilwoman Alissia Canady who argued this was all political and African-American voices weren’t being heard.

“While I respect Dr. King, while I want to honor his legacy, I’m not willing to do it at the cost of the people who are going to be directly impacted by it,” Canady said.

She pointed out only 100 of 1,800 people living along The Paseo signed a petition in favor of the name change.

Listen to the whole debate in the video player below.

Prior to Thursday’s vote, Kansas City was one of the only large American cities without a street renamed for the civil rights icon.

On Thursday, Lucas urged the council to stop looking for reasons not to vote yes, and do the right thing and join 900 other cities across America who have already named streets for King.

“Instead of us continuing to come up with a thousand reasons to say no, let’s think about why yes on Paseo,” Lucas said.

In Kansas City, there’s a park named after King. But some community members said that’s not enough.

“My question is what will happen to the boulevard in 40 years? I’ve got 40 years of track record on a park with his name, and it’s disgraceful,” Mayor Pro Tem Scott Wagner said.

Some of the other suggestions have been to rename 63rd Street or the new KCI terminal building for King. Neither of those ideas gained much support.

There have been previous attempts to rename a street for King in Kansas City.

In 2011, Councilman Jermaine Reed spearheaded an effort to rename Prospect Avenue for King. That movement failed to gain enough traction. Congressman Emanuel Cleaver confirms there was a similar push to rename Prospect in 1975 that also fell short.

WASHINGTON, D.C. — Revelations that President Donald Trump is personally liable for more than $400 million in debt are casting a shadow that ethics experts say raises national security concerns he could be manipulated to sway U.S. policy by organizations or individuals he’s indebted to.

New scrutiny of Trump, who claims great success as a private businessman, comes after The New York Times reported that tax records show he is personally carrying a staggering amount of debt — including more than $300 million in loans that will come due in the next four years.

The new distribution center at 4029 N. Pleasant Ave. is expected to create approximately 300 jobs upon opening, a count the company plans to grow as necessary to support increased demand for service in the area, FedEx Ground spokeswoman Nikki Mendicino told the Kansas City Business Journal.

TOPEKA, Kan. — Authorities say capital murder charges were filed Monday in the 2016 triple homicide of a man, woman and unborn child at a Topeka apartment complex.

Once shot 7 times on duty, Wyandotte County deputy retires after struggling with PTSD