On Tuesday, City Manager Troy Schulte signed an interim operating agreement with Bird, an electric scooter company. It allows the company to do business in Kansas City — with certain stipulations.

The agreement will last up to six months while the city comes up with a pilot program. It could end sooner, depending when the pilot program launches.

Claire Anderson and Ashley Rehm ride the scooters to Power & Light from the Crossroads for lunch and said it’s the easier than driving or other transportation options. 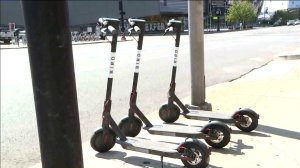 Several city departments will come together to create a pilot program while the agreement is in place. They’ll look at things like infrastructure and connectivity. Per the agreement, Bird has to share its data on usage patterns with the city.

“We will see where they are the most popular,” city spokesman Chris Hernandez said. “And this will tie in with everything to do with bus routing, street car issues, transit stops as well as which infrastructure needs more space.”

Bird also has to share revenue with Kansas City. It has to pay $500 to start, and then $1 a day per scooter. Right now, there are 100 scooters — the minimum under the agreement. Bird can have up to 500.

City officials said that will give them the dedicated stream of income it lacked before to make bike and pedestrian improvements.

“That will create the revenue that we can then do things like build the bike corrals, build more bike lanes, so you can use the scooters in those as well,” Hernandez said.

The operating agreement isn’t just for Bird. Similar companies can also enter into contracts with the city. Hernandez said another scooter company, Lime, has already reached out to them.

Once the pilot program launches, it will go for a year and a half. At that point, the city will see if it needs to make changes to its code to accommodate the scooters.

People zooming through downtown on the Bird scooters said they’re eager to see more of them.

City officials remind you, if you’re going to rent one of these scooters, you have to follow Kansas City’s bike laws. You can’t ride the scooters on sidewalks; you have to ride them on the streets or in the bike lanes. Helmets are encouraged but not required by city law.

You can read the full interim operational agreement here.