KANSAS CITY, Mo. — Veterans Day is always in November, but on March 13, the country honors all dogs who have served in American wars with K9 Veterans Day.

The National World War One Museum paid tribute to military and police dogs by flying some special flags along their entryway. Hundreds of flags flapped in the wind in front of the museum, but instead of the traditional red, white and blue, these flags where in the colors that dogs distinguish best…yellow, white and blue.

Throughout history, tens of thousands of dogs have served our country during war time, from Europe to Africa to Vietnam to Iraq and Afghanistan. 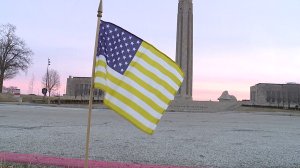 “Dogs would find themselves giving aid in no man’s land, these areas between the trenches where there would be wounded soldiers”, Dr. Matthew Naylor said, President of the National World War One Museum. “Dogs would be able to bring them water or bring comfort to dying soldiers.”

Jet Li is a 10-year old Dutch Shepard. He served with the Navy Seals in Iraq and then with the Indianapolis Police Department. His handler Pan Douangdar said he performed over 100 apprehensions with the police.

“He was a narcotics dog. While he was in Iraq, he did high target value acquisitions. He was a combat assault dog for the Seals. He served our country well.”

Jet Li is named for his handler’s brother John Douangdar, a Navy Seal veteran and dog handler who died when his helicopter was shot down by Taliban in Afghanistan.

“My brother was lead dog handler for Seal Team 6 and he some of the best of the best. He had a passion for dogs. He bonded well with them. We are trying to keep his legacy alive.”

Although dogs have been named as official members of the military since 1942, K9 Veterans Day has only been around for a couple of years. These heroes have saved countless human lives scouring mine fields in advance of their units, delivering dangerous messages across bloody battlefields and attacking enemies with instincts that are quick and deadly.

“Jet has alerted on criminals before his handler even had a chance to see them. He has alerted IED’s. They have senses we couldn’t fathom,” Pan Douangdar said.

On Sunday, Jet Li and his fellow K9 Veterans go into retirement facing obstacles normal dogs don’t. Some struggle with PTSD or allergies or arthritis and injuries made worse by the rigors of training and service.

“They were silent workers and went for many years unrecognized. I’m glad they finally did. It means a lot to us for them to honor Jet and people like my brother.”

Project K9 Hero raises money to pay for food and medical expenses for retired military and police dogs. If you would like to help, you can make a donation at here.