KANSAS CITY, Mo. — A nearly immediate treatment for severe, life-threatening depression is being touted by doctors and patients as a miracle drug, a life-saving measure for those who struggle with persistent thoughts of suicide.

The treatment is somewhat controversial, but at least one Kansas City woman says without it she may not be alive today.

Ketamine was introduced in the ’60s and used widely in the medical community for pain management, anesthesia and as an animal tranquilizer. Then it became known as a party drug.

“It has a bit of a sordid past, but it is potentially one of the best interventions that we will have in the future for major depression,” said Dr. Darrin D’Agostino, executive dean and vice president of health affairs for Kansas City University of Medicine and Biosciences.

“Unlike most of our current medications that we are currently using now, it works directly on one of the neurotransmitters and the receptors for those neurotransmitters to make connections in the brain much faster than our traditional medicines,” D’Agostino said.

Traditional medicines can take weeks or months to work. Ketamine can take less than an hour.

Ketamine is FDA approved for anesthesia, but not for depression.

But D’Agostino said while the FDA hasn’t approved ketamine for depression, that doesn’t mean it doesn’t work.

“The FDA doesn’t have an indication for that, which doesn’t make it illegal to use. It just means we don`t have the science behind it to support the dosing and the regimen for use,” he said.

Doctors and researchers haven’t come to an agreement on the proper dosing and timing for ketamine, and they also don`t know the long-term effects of using the drug for depression treatment.

When it’s used for anesthesia in surgeries, D’Agostino said there are virtually no long-term side effects. Recreational users can become psychologically addicted and often have long-term health issues. 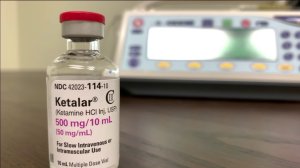 Dr. Irfan Handoo from Psychiatry Associates of Kansas City has treated dozens of patients with IV Ketamine infusions for depression.

He said the risk of abuse is one reason that current addicts are not ideal candidates for ketamine treatments and former addicts have to be evaluated on a case-by-case basis.

He also said his clinic has strict guidelines for choosing ideal candidates for ketamine. One major qualifier is having treatment-resistant depression.

“Generally we want to see that a patient has tried at least two or three other treatments,” Handoo said.

The ketamine infusion lasts for about 40 minutes. Some patients report it’s an odd feeling, but it’s not unpleasant. Other patients report hallucinations, dizziness, nausea or feelings of anxiousness with ketamine, among other side effects.

Greta Perel was treated for her treatment-resistant severe depression with ketamine at Handoo’s office. She said the six weeks of treatments were intense.

“There were times when it was like I`d look down at the IV, and it`d be like, ‘Man, it`s come to this. This really bites,'” Perel said.

But Perel said the effect ketamine had on her was immediate.

After one treatment, the suicidal thoughts ended, and after three treatments she felt noticeably different.

“It was like being in an extremely loud room for a long time and all the sudden, the noise turns off, it was dead silent,” she said.

Living without depression was an adjustment for Perel. So although she said ketamine took it away, it didn’t instantly restore her to her previous self.

That’s why D’Agostino said the drug has dramatic effects, but it needs to be used with caution and guidance from a physician.

“Have a very in-depth conversation about what to expect, it is not a miracle drug, but it will change the depressive symptoms dramatically,” he said.

Each IV ketamine infusion at Advanced Psychiatry Associates of Kansas City costs around $1,000, and six treatments are usually recommended. There are several facilities that say they offer IV ketamine treatments in Kansas City.

Janssen, a pharmaceutical company, is also developing a nasal spray using a drug similar to ketamine that could be beneficial for depression and suicide intervention. It’s on the fast track for FDA approval, but has not been approved yet.

If you are having suicidal thoughts, we urge you to get help immediately.