KANSAS CITY, Mo. — Marvin Gregory is a large man living in a tiny home, and he couldn’t be happier.

“I just want to be in here and absorb it all,” he says.

The 6-foot-5-inch US Army and Coast Guard veteran moved in to his new 240-square-foot home in Kansas City last week after spending more than six years on the streets, homeless and struggling to find a place to sleep every night.

“Doors are closed for you when you’re a little older and people don’t think you have the goods to work and make it happen,” says the 50-year old father of seven. “It’s rough. They have some places. But the shelters are pretty much full and it’s hard finding shelter in [Kansas City].”

Gregory’s new home is one of 13 tiny houses built by Veterans Community Project, a nonprofit organization started by fellow veterans focused on helping homeless vets get housing and services to help them be self-sufficient.

“We’re pulling these guys out of the trenches in their battle and saving their lives because they would have done the exact same for us,” explains Brandon Mixon, one of Veterans Community Project’s co-founders and a retired Army specialist. “They could have been that guy that saved my life in Afghanistan or pulled me to safety.”

‘Guys were getting lost’

Two years ago, while working with various nonprofits in the Kansas City area, Mixon and fellow veterans Chris Stout and Bryan Meyer were frustrated at the difficulty many veterans had getting services in the city.

“Everybody was defined differently, whether it was where they served, how long they served, what conflict they served in, their discharge status,” says Stout, a retired Army corporal and Veterans Community Project’s CEO. “It was a mix of many different reasons as to why veteran organizations were not serving them or where they would serve them. Guys were getting lost in that.”

The three men decided they wanted to create a central place where every veteran, regardless of time spent in the military, could get help.

‘They need their own space’

One of the first services Veterans Community Project provided to vets in need was a program that offered free rides on city public buses. Stout says that made a huge difference for many veterans, but they still had nowhere to go when the buses dropped them off at the end of the day.

They began to brainstorm about housing solutions for people coming to them for help. Their first idea: Rehab an abandoned school.

“After talking to some of the homeless vets, we realized they refused to go into that communal living,” says Stout. “They were like, ‘you know we’re not going into that shelter living.’ The consensus was they need their own space.” 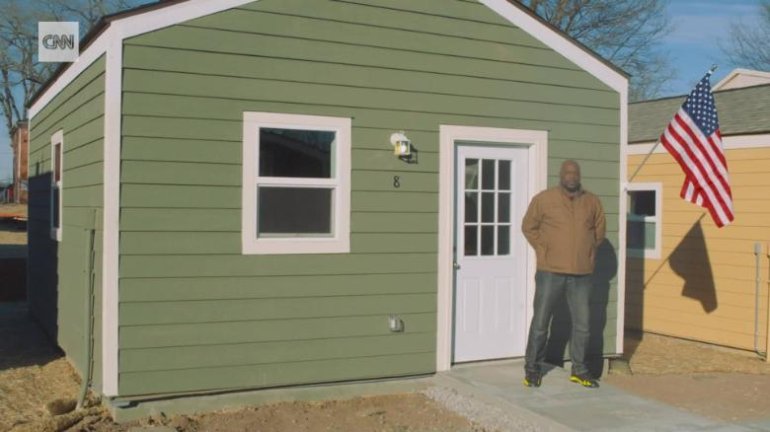 After doing some research, he knew small-scale houses built close to each other would be the most feasible option for achieving their goal.

“It’s kind of like that barracks mentality … so they can be there to support each other and we can support them,” he says.

Stout and his partners’ mission was to build 50 tiny houses and a large community center on a few acres of land they had bought in south Kansas City, and do it in six months. But city officials had other ideas.

“[The city] did not want another trailer park,” says Stout.

For several months, Stout and his colleagues worked with city planning officials to make sure the community would be safe, have all proper utilities and access for emergency services.

“It’s a trick to build a house to code at that size,” he says. “But it’s just like a traditional house, they’re just smaller. We want to put them in something that I’d be willing to work with.”

Last month, in subfreezing temperatures, Veterans Community Project and volunteers worked tirelessly seven days a week to build the first 13 homes for veterans (11 men and two women) they had chosen to be the community’s first residents. One of them: Marvin Gregory.

“It’s overwhelming at times because I’ve been in so many negative situations and doors closed in my face,” says Gregory. “These guys are going to give me my own place and it’s going to give me a start to move higher and get myself in a position to hopefully one day buy my own home.”

Mixon says when residents do eventually transition out of the community, they can take all of the items out of their tiny home with them. But, he stresses, Veterans Community Project’s main mission is not to just provide a roof, couch or refrigerator.

“The tiny houses are the very smallest minute piece,” he says. “They are the catchy, sexy, cool piece. But what we actually provide are services like free health care, dental care, veterinary services, and help finding work.” He and his partners strongly believe that is the best thing they can do for their “brothers and sisters.”

Veterans Community Project’s founders says interest in the project has already come from hundreds of communities across the country. They’ve begun work with the city of Nashville to replicate the tiny home community in the Music City.

For Gregory, his new home leaves him speechless.

“Words can’t describe it. God has looked down on me and my fellow military buddies came and rescued me. Never leave a man behind.”