KANSAS CITY, Mo. — With the Kansas City mayoral primary election weeks away candidates are ramping up efforts to connect with voters.

On Saturday, eight of the candidates attended a forum focused on the Kansas City Latino community to discuss the issues most important to them. The open event, Kansas City Forum for All, was held at the Samuel U. Rodgers Health Center.

Their goal is to ensure the voices of immigrant, refugee, and Latino communities are heard. The candidates discussed a wide range of issues over the two hour event. Mayor Sly James’ Pre-K initiative was a hot topic along with growth of local jobs, Latino representation in positions of power, and illegal immigration enforcement in Kansas City. Many of the candidates at the event expressed the decisions made within the city about Latino issues may set a precedent to surrounding communities. 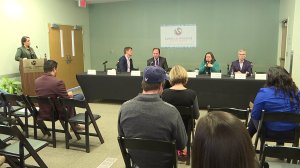 Moderators asked the candidates questions along with attendees being able to ask their own near the end of the event. Celia Ruiz and Edgar Palacios are two voters who say they are making sure to be educated through the election process, and are attending several forums to hear the stances of each candidate.

Ruiz asked the candidates about how, as mayor, they would hold a seat on the Board of Police Commissioners, and how they would influence the relationship between ICE officials and the Kansas City Police Department. Ruiz said all of the candidates who attended said they were open to immigration and the acceptance of refugees, but for most candidates she wasn’t sure she heard what she was looking for. She believes by asking them these questions in an open forum they can be held accountable later.

“If at some point those who are present today one of them become our mayor I know that I can hold that person even more accountable because one, maybe they remember my question,” Ruiz said. “Two, maybe this will pop up somewhere. It is empowering for any one of us citizens.”

Palacios’ question was focused on job growth and diverse representation in city government. He says he would like to see a candidate that would appoint latino leaders to positions to make a difference in his community.

“I was excited to see a forum dedicated specifically for the Latino community,” Palacios said. “I really wanted to understand where there positions were in terms of increasing representation within our own community,  and their commitments, and seeing where they stood on that.”

“It is a good acknowledgement that our community is growing in Kansas City at the ten percent level of our population, and the fact that they are recognizing that we are a force to be reckoned with – I’m excited about that,” Palacios said. “Being able to hold them accountable for their policies, and their decisions that they’re going to be making in the future is exciting.”

BALTIMORE — President Donald Trump honored America’s fallen service members on Monday as he commemorated Memorial Day in back-to-back appearances in the midst of the pandemic. “Together we will vanquish the virus and America will rise from this crisis to new and even greater heights," Trump said during a ceremony at Baltimore’s historic Fort McHenry. “No obstacle, no challenge and no threat is a match for the sheer determination of…

KANSAS CITY, Mo. -- Not all Memorial Day ceremonies around the metro area have been canceled.

A group of fewer than 50 gathered to remember the sacrifices made for our freedom at Terrace Park Cemetery in the Northland.