KANSAS CITY, Mo. – Organizers behind KC Riverfest are promising the “biggest and longest” show at this year’s Fourth of July event at Berkeley Riverfront Park.

On Wednesday, volunteers and vendors worked into the late afternoon hours setting up and moving things into the park ahead of the 14th annual festival.

One of the hidden figures of the event are the people behind the fireworks show.

“You either love this job or you don’t do this job,” said Stuart Schwartz, a pyrotechnician with Zambelli Fireworks, the company running the show. “It’s that simple.”

Their team has been working 12- to 14-hour days since Monday assembling more than 1,000 fireworks on the levee across the park. 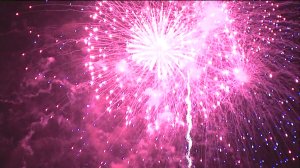 However, planning for the 20-minute light show began months ago.

All it takes is one push of a button and a computer sends currents through wires that contain electronic matches, which spark the explosives.

“You are around dangerous things, but when it’s over and you hear the crowd cheering across the river, it’s extremely gratifying,” Schwartz said. “It just lets you know people appreciate what you do and that all the hours, sweat, blood and tears were worth it.”

Stefan White is the president of Friends of the River Kansas City, the nonprofit behind holiday event. He said people who attend this year’s show will enjoy the fireworks no matter where they are in the park.

“We’ve actually lengthened the space on the levee, so it’s away from the bridge, and brought it more center to the park,” White said. “So when we fire them off, it’ll be a much wider, longer show that takes up majority of the park. That’s new for us.”

The event will also include food, drinks, vendors, play areas for kids and three stages. The 14 bands performing are all from Kansas City — something that has never happened, according to White.

“It’s one of those things where a family could come out and spend an entire day and not break the bank,” he said. “It is as Kansas City as it gets.”

The festival is also the largest fundraiser for the nonprofit organization.

“[This money helps us] clean up the river and plant trees, bushes, wildflowers — those types of things — to keep Kansas City green, clean, beautiful so people keep coming back to the parks and enjoying the nature that runs through our city,” White said.

KC Riverfest runs from 3 p.m. until 10 p.m. on the Fourth of July. Admission is $5 for adults, and children 12 and under get in for free.

You can learn more about the festival by clicking here.

The police department tweeted early Tuesday that the officers were taken to a hospital with injuries that were not believed to be life-threatening. It was unclear who had fired the shots.