KANSAS CITY, Mo. – One KC senior center is out tens of thousands of dollars because of the number of snow days they were forced to take.

The Don Bosco Center serves hot meals and transportation to more than 500 senior citizens, 300 of whom are homebound.

“A lot of them are low-income, not all but a lot of them are and the home-bound people, most of them don’t have the means or a way to get out on their own,” said Mo Orpin, executive director at the center.

Orpin and her team are trying to recover more than $40,000 that was lost after the center shutdown 11 times this winter due to bad weather.

“We get reimbursed for the meals and transportation of the seniors to and from the center by the Mid-America Regional Council,” Orpin said. “Each time we’re closed, it costs us around $4,000. So that’s a lot of money.”

It’s an unprecedented number of closures, according to Anne Miller, who has worked at the center for 25 years.

“The record in the past was maybe six times, if even six times over the course of a winter, so 11 just blew us away,” Miller said.

“Yes, it’s hurting us financially, but we’re trying to come up with some new ideas on how to raise the money,” Orpin added.

One of the ways they’re trying to boost their budget is by raffling off an autographed Patrick Mahomes jersey. 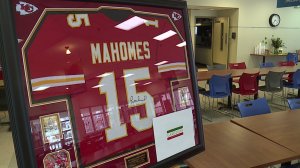 “It’s an official jersey that’s been signed and framed with some other memorabilia,” Orpin said.

The organization is only selling 1,000 tickets at $25 each or five for $100. So far, they’ve sold 200 tickets since launching the campaign Monday.

“We really could use the help of the Kansas City community,” Orpin said. “Anything’s going to help us.”

She said if they are unable to raise the additional money, the organization will likely have to reevaluate some priorities.

“We run on a tight budget, and our staff is skeletal. So we’re going to make some tough choices on what to cut back either by cutting some staff or services which we don’t want to do either,” Orpin said.

The organization is planning two smaller fundraisers this spring to help with their budget woes. They’ll host a brewery tour on May 4 and their annual party at Knuckleheads on June 1.

You can purchase a raffle ticket by clicking/tapping here.

Second stimulus checks: Where we stand after Trump’s push for new direct payments