Terrie Jackson was adopted at birth more than 50 years ago. A 23andMe DNA test kit would bring them back together.

“I was so excited. Obviously we have been talking back and forth through messenger, but to actually see her in person and get to hug her — best moment of my life,” Jackson said.

It was an emotional moment the sisters said they only dreamed would happen. 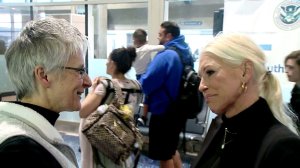 Cameron said over the years, she tried to find her sister after learning her mother gave away a child for adoption when she was young, but never had enough information. Jackson never knew she had a sister, but knew she had family somewhere else.

“I’ve gone to all the adoption registries, but the thing that was hindering the search, I didn’t have a lot of information. I didn’t have a date, a birth date,” Cameron said. “The only thing I knew for sure was my mom’s maiden name was going to be on the birth certificate. That’s the only information I had.”

“I was adopted at birth, and I new I was adopted, but I had no knowledge or anything of my birth family,” Jackson said. “I grew up here in Kansas City.”

She said it was actually through her daughter’s 23andMe test that Cameron was able to reach out to her.

“My daughter told me about Jody, and then Jody reached out to me,” Jackson said. “The rest is history.”

To make the moment even more special, for the first time, Jackson was also able to meet her birth father at the same time. He flew from California.

For the longest time, he had no idea Jackson existed. 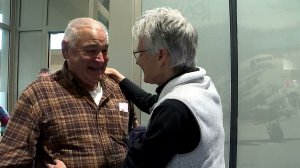 “I got another daughter and real quickly,” Gary Gates said. “I’m choked up. Tears in my eyes. It’s been long time.”

The family said the moment is bittersweet because the sisters’ mother isn’t alive to witness the moment.

But the family said they plan to spend the this new year catching up on all the missed time. The sisters said finding each other after all this time is the most incredible blessing — and best way to start the new year.

“We are just going to go to dinner tonight and get to know each other,” Cameron said.

JEFFERSON CITY, Mo. — Missouri Gov. Mike Parson is seeking to take unused doses of the coronavirus vaccine back from pharmacies so they can be distributed to mass vaccination sites operated by the National Guard around the state.

It's an effort to speed up the sluggish pace of immunizations.

Roses and chocolates? Get your love some mac and cheese this Valentine's Day!

Kraft is launching Candy Kraft Mac & Cheese, a twist on its classic Mac & Cheese with a candy flavor packet to turn the mac and cheese pink. The new creation promises the same cheesy goodness, with a hint of "sweet candy flavor."

KANSAS CITY, Mo. -- A pair of builders are returning to the River Market with plans for a nine-story multifamily development on an infill site just east of the current ramp onto the Buck O'Neil Bridge.

Developers George Birt and Taylor McKee seek to build 303 Broadway, with 76 apartments, at the northeast corner of Fourth Street and Broadway.