KANSAS CITY, Kan. — A man died Monday afternoon following a rollover crash in KCK, but people who were in the area tried their best to save him.

Neighbors living near 34th and Metropolitan Avenue jumped into action to try and save a man who was trapped in his truck.

According to KCKPD, Shortly after 2 p.m., a man driving an old pickup truck and a woman in a black sedan crashed into each other head-on.

“I think significant speed is probably going to contribute to how the vehicles ended up,” KCK Police Officer Zac Blair said.

Belt was inside his house when he heard the crash and ran out to see what was going on.

He said the woman appeared to be fine, but the man in the truck was in bad shape.

“One man reached in there and said they couldn’t feel him breathing,” Belt said.

Belt and about 10 good Samaritans ran to the man’s aid, but they couldn’t get to him.

“The truck was upside down, and it was almost flat down against the seats, and he was crunched up in there someway,” Belt said.

He said they tried prying the doors open, but they wouldn’t budge.

That’s when one of the good Samaritans suggested turning the truck on its side.

“Everybody just grabbed a piece and turned it up,” Belt said. 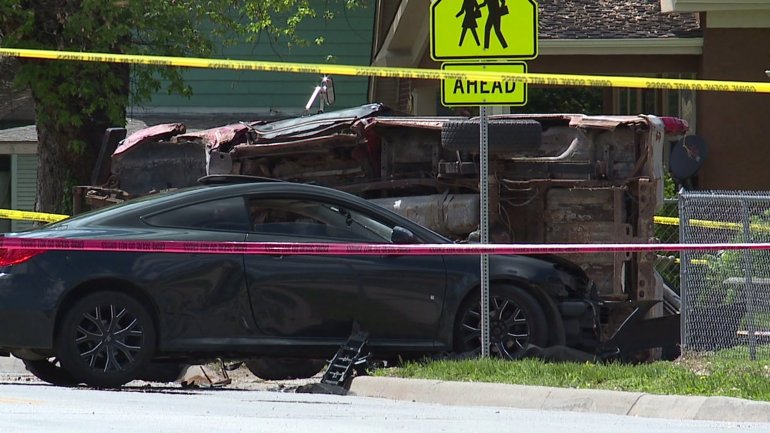 Firefighters and medics arrived shortly after, but it was too late. Police said the man, identified as 51-year-old David Brunson, of KCK, died at the scene. The woman was taken to the hospital and is expected to be OK.

“That’s the first one I’ve ever seen that was bad,” Belt said.

He said he’s no hero. He and the others were simply trying to do the right thing.

“That was the only chance if he was alive to help him, so that’s what we did,” he said.

RICHMOND, Va. -- A Virginia couple found a safe way for a loved one to watch them tie the knot, despite the coronavirus pandemic.

Harvey Sydnor and his wife Virginia Whitlock held a wedding ceremony at her grandmother's living facility. As a result of COVID-19, grandma couldn't watch them get married for the first time, so they brought the ceremony to her front door.

WASHINGTON (NEXSTAR) -- If you were betting political gridlock centered around the November election would come to an end after Americans went to the voting booth, you lost that bet.

Nearly a month after voters decided the next president, Congress is no closer to finding common ground on coronavirus relief or getting new direct payments to Americans.