If someone is hit with a paintball gun in their eyes, it can cause serious and even permanent damage.

A security camera near 41st and Campbell caught the truck that police say the shooter was riding in. A neighbor, who did not want to be identified, says she was sitting on her porch when shooters aimed at her, her husband and her neighbors.

“All of the sudden you see a gun pointed at you and you hear the pellets,” the woman said. “You don’t know what’s going on. But, it was scary.”

Police also say the shooter fired his paintball gun at a father and his two young children.

Anyone with information or anyone that may recognize the truck and driver in the photo are asked to call the TIPS Hotline at 816-474-8477. 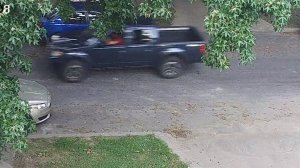 "It has been said that together we are stronger, but we have a new enemy in COVID-19,” Michael House said at a virtual Memorial Day ceremony hosted by the World War I Museum at Liberty Memorial.

OLATHE, Kan. -- With public pools and spraygrounds closed in many areas throughout the metro, people are looking to bring the fun into their own backyards.