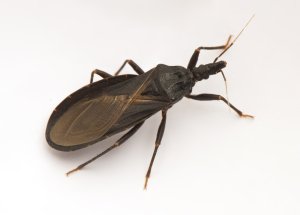 A bloodsucking “kissing bug” bit a Delaware girl on the face last summer while she was watching television. Now, the US Centers for Disease Control and Prevention is calling the incident the first confirmed identification of the bug in the state.

Triatoma sanguisuga, often called the “kissing bug” because it usually bites around the eyes and mouth, can transmit a parasite called Trypanosoma cruzi. The parasite causes Chagas disease, which can have serious cardiac and gastrointestinal complications.

When the girl was bitten, her family contacted the Delaware Division of Public Health and the Delaware Department of Agriculture for help in identifying the creature. They were concerned about possible disease transmission from the insect, according to a CDC report Thursday.

“The girl who was bitten had no ill effects,” the report said, and although the bug’s presence was confirmed in Delaware at the time, there is no current evidence of Trypanosoma cruzi in the state.

Yet the case raises new concern about how many additional kissing bug bites might occur this summer across the nation — and what that means for public health.

Although the risk of Trypanosoma cruzi transmitted by kissing bugs is minimal, most of the kissing bugs in the United States are potential disease vectors, and parasite transmission could increase because of climate change, according to a paper in the journal Emerging Infectious Diseases in 2012.

Chagas is endemic to Latin America, where a different species of the bug lives and can find its way into rural households.

“They might have thatched roof or poorly insulated walls, and the bugs set up shop and feed on animals and people at home,” Sarah Hamer, now an associate professor of epidemiology at Texas A&M University’s Veterinary Medicine and Biomedical School, said in 2015.

Yet the bugs exist here in the United States, too.

Hamer said the kissing bug and Chagas have long been our neighbors: “The earliest reports are from the 1800s. The first parasites have been reported since the 1940s. We’re just diagnosing more disease. We’re paying attention to it now.”

The CDC estimates that there are 300,000 people living with Chagas in the United States, but most cases are contracted in other countries.

Only a few cases of Chagas disease from contact with the bugs have been documented in this country, and kissing bugs have been reported in 28 states, mostly in the southern half of the nation, according to the CDC. The bugs in the United States are most likely to be found outside.

To prevent infestation, the CDC recommends that you:

If you suspect that you’ve found a kissing bug, the CDC says not to squash it. Instead, place it in a container and fill with rubbing alcohol or freeze in water, and take it to your local health department.